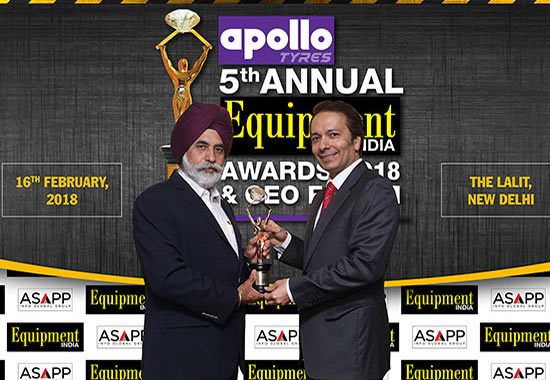 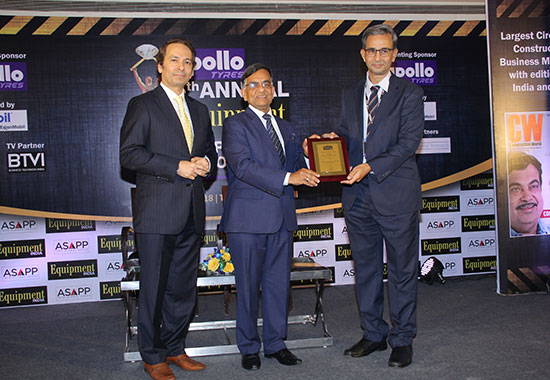 New Delhi, February 16, 2018:
The Foundation of Infrastructure Research Studies Training (FIRST) hosted the 5 th EQUIPMENT INDIA Annual Awards at Hotel LALIT in New Delhi on Friday 16 th February, 2018. Sandeep Singh, Managing Director, Tata Hitachi Construction Machinery Co. was named the ‘Equipment India Person of the Year’ for 2017 at the 5 th edition of EQUIPMENT INDIA AWARDS held in New Delhi on February 16, 2018, late evening. Also referred to as the Oscars of the Indian construction equipment industry, Singh was unanimously chosen for the EQUIPMENT INDIA honour by an eminent 11-member jury for his notable contribution to his organisation by engineering a turnaround of sorts, thereby winning the coveted award for 2017.

“I would like to dedicate this award to my team at Tata Hitachi as also dealers and vendors who have really supported us to produce good quality machines and take care of our customers,” Singh said in a video recorded message that was played on the occasion.

‘Equipment India Special Recognition Award’ was conferred on K Vijay, Managing Director, Ajax Fiori Engineering India Pvt Ltd for his contribution to the industry during the past year. “I am truly humbled that I have been chosen to receive this award. I see this as a token of recognition of the organisation that I have been privileged to lead for a very long time,” he said.

JCB India was honoured with the ‘Equipment India Special Recognition Award’ for its contribution to the construction equipment industry over the past 39 years.

Arun Goyal, Special Secretary, Goods and Services Tax (GST) Council, was the Guest of Honour in the function. In his special address, Goyal said, “Many of you who are into sales of industrial or construction equipment in different states must have had to deal with a number of authorities earlier. The tax rates, forms and procedures were different. The process was quite mind-boggling and difficult, and companies had specific departments to deal with it. All that is past now as we have been able to merge central taxes, particularly service tax, excise and VAT under GST.”

“Now you just have to be on the IT platform, and the way the system has been designed, you don’t have to interact with the tax authorities at all,” he added. He urged stakeholders to feel free to reach out to him if they had any concerns. Referring to the gradual improvement in the economic sentiment, Pratap Padode, President, FIRST observed, “The budgetary expenditure on infrastructure has risen by Rs 1 trillion over last year. Given the momentum of projects and thrust on infrastructure, the sale of construction equipment units is likely to cross 90,000 units by 2021.”

“The government obviously knows that if it has given the pain of the kind of demonetisation and GST, it now needs to push up public spending as much as possible and press the paddle for the economy,” he added.

The winners were selected by an eminent jury comprising:

A CEO forum on the theme of ‘Technology to Drive the Future of Construction and Infrastructure’ was organised before the awards ceremony got underway. The panel discussion was moderated by RK Pandey, Member Projects, National Highways Authority of India (NHAI).

Copies of MATERIAL HANDLING EQUIPMENT INFOBANK and the 10 th Annual Issue of EQUIPMENT INDIA were also released on the occasion.

About FIRST: Foundation of Infrastructure Research Studies Training (FIRST) is a non-profit body engaged in research and information on national development since 2003. It tracks infrastructure-related projects, right from the conceptual and planning stage to implementation and commissioning, in India. The trust publishes sector reports that provide credible information, is timely and useful for accessing and disseminating business opportunities.