March 07,2018
Finance Minister has increased allocation for infrastructure and rural development in the Union Budget 2018-19. A report on the current Budget with responses from industry.

Push to infra growth
As the Finance Minister said during the Budget speech, infrastructure is the growth driver of economy. Budget 2018 accelerated this thought with an investment of
Rs 5.97 trillion for infrastructure, against the estimated expenditure of Rs 4.94 trillion in 2017-18. Giving thrust on transport infrastructure, the government unveiled the largest-ever rail and road budget of Rs 1.48 trillion and Rs 1.21 trillion, respectively for 2018-19. Apart from the core infra sectors of Railways and Roads, rural infrastructure has also got special attention in the Budget through increased allocation for development of rural roads, houses, sanitation, irrigation and water supply.

Vipin Sondhi, Managing Director & CEO, JCB India
The Union Government presented a balanced Budget with a focus on the agri sector, rural development, healthcare and a continued thrust on infrastructure creation. All these will provide significant impetus to the revival of growth and creation of employment. The Budget also addresses the opportunities to modernise and create new infrastructure in affordable housing, railways, and airports which continues the effort of the last few years. These will present favourable opportunities for growth to the Indian construction equipment industry. Incentivisation to the MSME sector, which forms the backbone of industrialisation of a nation, as also job creation is another welcome step.

Abhijit Gupta, Brand Leader and Managing Director, CASE India
Infra development has always been a priority for the government. In the Budget 2017, the government had increased the total allocation in the infrastructure sector by over 10 per cent. In the Budget 2018-19, we heard some positive news of connecting one lakh gram panchayats through high-speed optical fibre network.

This will enable broadband access to over 20 crore rural Indians in about 2.5 lakh villages. The Budget has provided Rs 10,000 crore for creation and augmentation of Telecom infrastructure. The much talked about and the ambitious Bharatmala Pariyojana has been approved for providing seamless connectivity of interior and backward areas and borders of the country to develop about 35,000 km in Phase-I at an estimated cost of Rs 5.35 trillion. Then there is Pradhan Mantri Gram Sadak Yojana (PMGSY) of 57,000 km roads and 28.35 crore mandays. Also, the Government is confident to complete national highways exceeding 9,000 km during 2017-18. This Budget has the much-needed approach for the creation of a holistic tourism infrastructure evident by the Finance Minister Arun Jaitley's mention of boosting the land and rail connectivity.

Sandeep Singh, Managing Director, Tata Hitachi Construction Machinery Co
Government is continuing with their investment in infrastructure, new initiatives
of waterways and railway strengthening and widening. A lot of push has given to irrigation and low cost housing. All this will support us. I think it is a good time, and the next 2-3 years are going to be good.

Anand Sundaresan, Vice Chairman and Managing Director, Schwing Stetter India
The Budget as a whole, is quite an equitable one addressing all the current problem areas like, farmers, senior citizens, health, banking, digitisation, etc, while giving the right push to MSMEs, Railways and infrastructure. No segment can afford to be unhappy with the proposals. But I wonder if, tweaking around with the tax rates on capital gains when the market sentiment is bullish, is a bold step. A subtle mention about the future of Aadhar card and its security, which is a bone of contention now, would have set at rest many unwanted rumours floating around.

Dr. Jairam Varadaraj, Managing Director, ELGi Equipments
The Budget has introduced some interesting schemes towards agriculture and rural development. They continue to support investments in infrastructure, which will support our portable compressor range. Many of our suppliers will benefit from the MSME tax reduction and perhaps the tax reduction will encourage capital expenditure, which could in turn support our industrial compressor range. Overall, while there are no explicit manufacturing boosters, we hope that the momentum from the last quarter will sustain through 2018.

Suresh KV, Country Head, ZF India
The Union Budget presented by Finance Minister Arun Jaitley shows immense promise for the country. The huge push given to infrastructure in the Budget by the government is a good move. Construction of 35,000 km of highways under the Bharatmala project with highway construction to exceed 9,000 km by end FY18 and the allocation of Rs 2.04 trillion for the Smart City Mission with 99 cities selected for development in FY19, are set to increase employment opportunities and create demand for commercial vehicles and construction equipment. Additionally, the extension of 25 per cent corporate tax benefit to organisations with turnover up to
Rs 250 crore is also a welcome move. All in all, we at ZF are looking forward to this financial year as this Budget gives us the motivation to continue on our path of futuristic and sustainable growth.

Souma Ray, Director, Haulotte India
There is a lot of emphasis being given by the government towards infrastructure development in the country which not only will increase employment but also help the industry at large as the demand of equipment shall increase. Further, the arbitrations in the rates on GST is also correcting the initial anomalies. For example, the initial GST rate for AWP which was pegged at 28 per cent has now been brought down to 18 per cent like some other construction equipment to be in the same level as that of mobile cranes. This is indeed a welcome step.

Dharmesh Arora, Managing Director & CEO, Schaeffler India
Finance Minister Arun Jaitley has presented a balanced Budget. He has stayed on the growth momentum and allowed small widening of fiscal deficit in the short term to focus on continued growth agenda. There is a huge focus on infrastructure development towards road construction, railways and air travel, that bodes well for spurring economic activity in many sectors such as construction equipment, commercial vehicles, in addition to the core sectors. The minimum support prices for the agriculture segment and higher budgetary allocation for the rural, agriculture and allied sectors should generate discretionary spending that is likely to spur consumption led demand and push rural economic growth. Relaxation of Corporate Tax on smaller industries show positive intent in line with previous announcements of reduction of corporate taxes. This also means surplus cash available for capital expenditures and growth in those sectors.

Raaja Kanwar, Managing Director, Apollo LogiSolutions Ltd
The Finance Minister Arun Jaitley has presented a well-balanced and positive Budget. We welcome the proposal of the National Logistics Portal as it will improve the transparency and visibility of cargo movement across the country. With the announcement of 1.48 trillion allocated to Railways, we hope that there is a thrust on improving freight logistics apart from better passenger connectivity. This will help the logistics industry drive up efficiency through rail networks in terms of costs and CO2 reductions as the current logistics movement is skewed towards road transport. The government's plan to expand its current 124 airports by five times seems skewed in favour of passenger movement, however, the development of airports across the board is a positive shift in building a robust logistics network. We expect that freight movement is given due cognizance as well.

Chander Agarwal, Managing Director, TCIEXPRESS
As rightly mentioned by the Finance Minister in his Budget speech, infrastructure is the key growth driver of the economy and the government has made its intent clear to develop infrastructure in India by introducing several important measures. Logistics getting an infrastructure status last year, such focus to develop infrastructure in itself is a huge boost to the logistics sector. We welcome government's decision to allocate Rs 5.35 trillion to develop 35,000 km under Phase 1 as part of Bharatmala project. We also welcome other important initiatives like the decision to boost the MSME sector by allocating Rs 3,794 crore in the form of capital support; initiative to set up National Logistics Portal as a single online window to link all will push the need for express companies like TCIEXPRESS. All these along with other important measures like introduction of digital payment models like pay-as-you-use system for toll payments will enable a cashless economy and will promote ethical and transparent business.

Aneel Gambhir, CFO, Blue Dart
We welcome the Union Budget 2018 announced by the Finance Minister which has recognised infrastructure as a growth driver of the economy. The investments in infrastructure are estimated to be in excess of Rs 50 trillion. This will support the growth of GDP and connect and integrate the nation with a network of roads, airports, railways, ports and inland waterways. To facilitate trade and e-commerce, the government should consider Aviation Turbine Fuel (ATF) under the ambit of GST as the excise/VAT paid on these products are not available as input credit. Under the Service Tax regime, input credit was available for the excise paid on ATF. Under GST, this has a negative impact on logistics costs.

Ujjwal Batria, Managing Director & Country CEO, Nuvoco Vistas Corp Ltd (formerly Lafarge India)The focus of the Union Budget 2018-19 has been to boost investments in rural development, education, healthcare and social sectors. With sizeable allocations to the rail and road sectors; it clearly recognises the infrastructure sector as a growth driver. Revisions in MSP, emphasis on rural MSME credit, and similar initiatives should lead to a significant improvement in rural incomes. A push in rural development, road and rail sectors, affordable housing and smart cities will all help the cement industry; as an increase in rural spending power should translate into more housing. 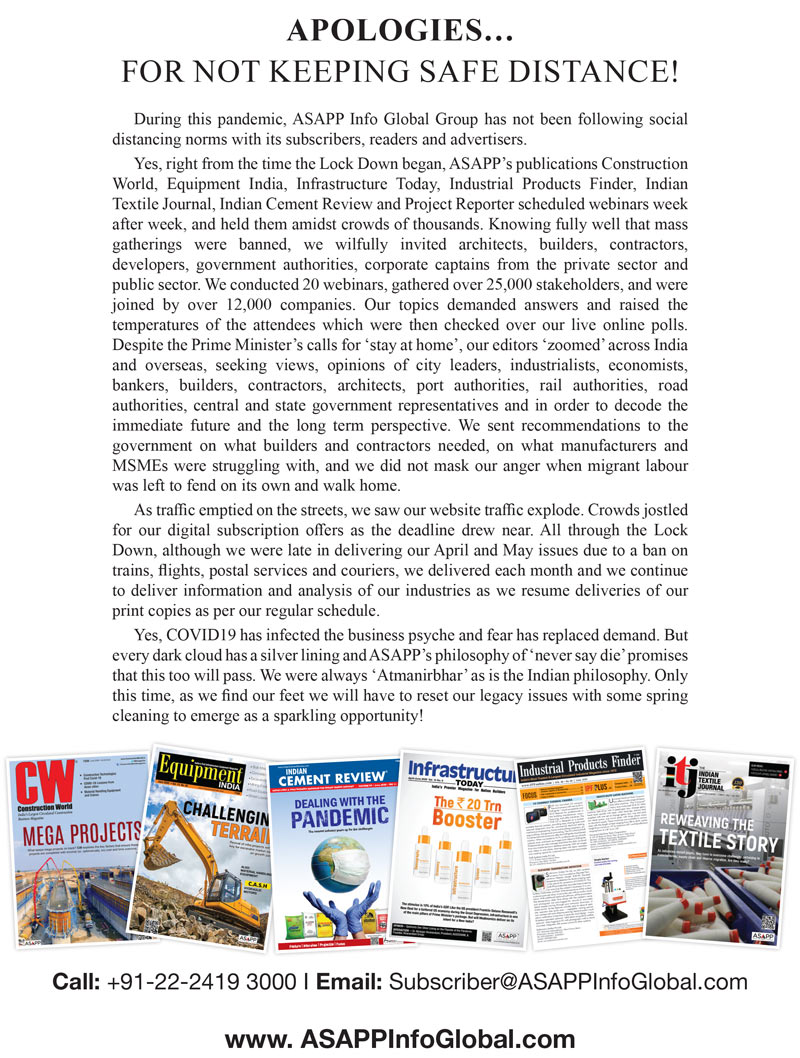