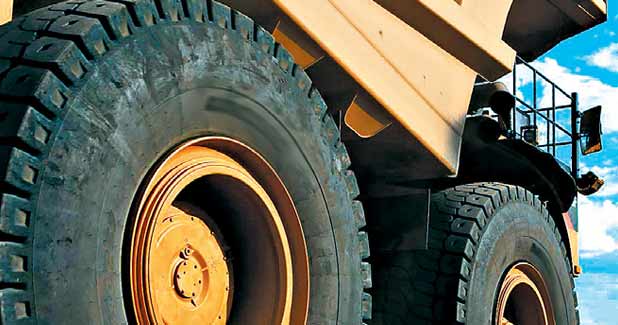 January 08,2020
In spite of the current slowdown, tyre market for off-highway applications is going to revive in the coming years due to an anticipated pick up in infrastructure developments in future.

Off-the-road (OTR) tyre market growth is backed by rising spending in construction, mining and agriculture sectors. Tractors and earthmoving equipment are the major demand drivers of OTR tyres. Mining and construction segment accounted for more than half of OTR tyre sales in India in 2017.

Current market scenario
The Indian OTR tyre market is forecast to reach 14.98 million units by 2023 from 9.71 million units in 2018, exhibiting a CAGR of 9 per cent during 2019-2023, according to TechSci Research. However, will the current slowdown in the market across the equipment segment pull back the growth prospects? There is stagnation in growth visible in the market in the current scenario. However, the market is expected to be back on growth path soon as the off-highway equipment market is going to bounce back from next year onwards from the current slowdown.

Says Ashok P Chhajer, General Manager-OE Sales, BKT, "Compared to 2018, there was a slowdown in 2019 in the bottom line. Segment-wise, it was a mixed trend with some segments having negative impact while some others positive. Overall, the tyre market was a bit down last year. These ups and downs are part of any business and one has to be prepared to face such situations, accept the challenges, manage them and come out of these difficult conditions. These market conditions are cyclical." Chhajer however sees some positive vibes in the market as he elaborates, "From October 2019, we could see some positive trends in the market. November also continued promising and December has seen projects taking off. We hope the first quarter of 2020 will continue with improved performance, meanwhile in the Budget 2020-21, we hope the government to announce good number of projects, clear the pending projects early, and ease out the fund flow in the market."

Demand trend
According to the existing market dynamics, the demand for tyres is almost 50:50 from OEM and after market. However, recently the demand has gone down in line with the slowdown in the market.

Chhajer observes, "A lot is happening in coal mining as a number of coal blocks have been allocated. We are sure that excavation will start soon in these blocks and there will be demand for equipment and allied products. Globally also we see coal mining on a continued growth in future due to demand for coal. Iron ore mining trend will depend on the consumption of steel in the country which may fluctuate in the current scenario. The market will be better in 2020 compared to 2019. We are optimistic on agriculture market as we had a good monsoon this year. Farmers are going to invest more in the coming season and this will push the sales of tractor tyres too. We also see some demand from after-market for tyres."

Radials vs bias
Globally, radialisation is at an advanced stage, while in India the trend is yet to pick up. Indian OTR segment is largely driven by bias tyres, while radialisation is picking up slowly. Tyre manufacturers are trying to educate the customers about the importance of using radial tyres in harsh applications in construction and mining sites.

There are opportunities and challenges for radialisation in India. Chhajer elaborates, "In the concept of radialisation, we are finding it difficult to convince the customers to switchover from bias to radial. Our entire focus is on radialisation as it is the future."

He adds, "We as a global player in off-highway tyres are very advanced in radial tyres, though Indian market is still to pick up in radialisation. So, there is an opportunity in India for more radial tyres by creating awareness among customers about the advantages of using radial tyres in mining and other severe application areas." Manufacturers gear up Today, all the major tyre manufacturers who were focusing on passenger and commercial vehicle tyres have started giving importance to OTR segment also. This has escalated competition among the players, leading to the introduction of technologically superior products from various players. Chhajer says, "Our long term goal is to gain 10 per cent market share in global OTR tyre market. Currently, we have around 5 per cent market share globally and we are working towards achieving 10 per cent market share in the next few years."

According to Chhajer, BKT offers wide range of SKUs in more than 2,700 varying from 5' rim diameter to 57' rim diameter viz bias, radial, all-steel radial and solid tyres for applications in dumpers, graders, trailers, forklifts to the technologically advanced machines like high horsepower tractors, combines, harvesters, GPS controlled vehicles, articulated dump trucks, high-speed cranes, port vehicle etc. "Apart from the above, we also do provide customised solution which keep ourselves ahead in the competition," he adds.

Market outlook
Our country is still in need of better infrastructure in roads, railways, ports, airports, urban infrastructure and rural development. Mining needs to pick up in coal, iron ore and other essential minerals, to meet the requirements of power, steel and other commodities. Agriculture sector is growing, but needs to pick up the growth momentum with more mechanisation. OTR tyres see major growth avenues in these segments in meeting the OEM and after-market requirements. Chhajer concludes on a positive note,"Overall, the government has to work a lot on infrastructure which will ultimately result in business for all of us. We hope 2020 will be good for us, at least better than 2019."

Indian market is always a growing market simply because of the reason that developments are still a necessity here. This future requirement is driving the growth of infrastructure sector in spite of the cyclical slowdowns. Taking advantage from this scenario, OTR tyre manufacturers are definitely going to provide their technologies and solutions for the continued growth of the segment.