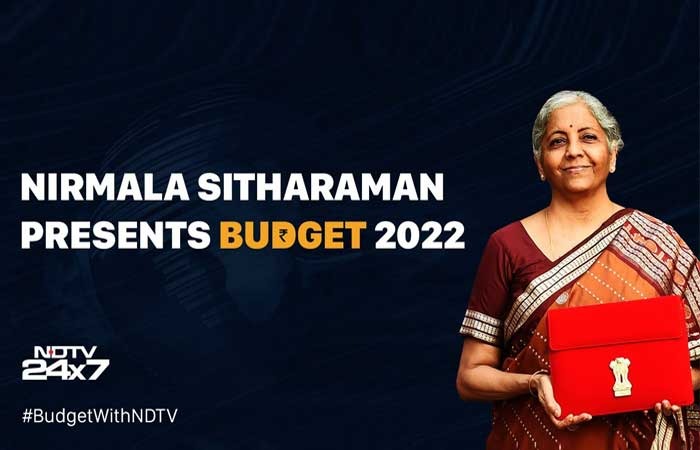 The Budget by Finance Minister Nirmala Sitharaman focuses extensively on key growth engines – PM Gati Shakti plan for building crucial infrastructure like roads, ports, railways, logistics, etc. Reforms in these sectors will give a fillip to the movement of goods and services and lay the blueprint for economic expansion over the next few years.

The outlay for capital expenditure in 2022-23 has been increased sharply by 35.4 per cent, from 5.54 lakh crore to7.50 lakh crore in 2022-23. The fiscal deficit for FY22 is likely to be at 6.9 per cent and the government has pegged the fiscal deficit target for the financial year 2022-23 at 6.4 per cent of the gross domestic product. For FY23, states have been allocated one lakh crore to help them in fuelling overall investments in the economy.

In 2022-23, the national highway network will be increased by 25,000 km. Housing is a crucial sector and the Government has allocated 48,000 crore for the PM Awas Yojana.

A strong capital expenditure announced in Union Budget FY23 coupled with a renewed focus on the affordable housing segment has led to a sharp jump in share prices of companies associated with infrastructure, realty, cement and steel, and other commodity-focused businesses.

The capital expenditure in key infrastructure segments like the railways has been budgeted to increase to Rs 2.45 lakh crore in FY23 (rising by 14 per cent over the FY22 BE); for roads and highways, it will rise to Rs 2.08 lakh crore (marginally higher, by 4.8 per cent, than the FY22 BE). That for metro and the MRTS projects remained stagnant at Rs 19,100 crore.

What the industry has to say

Said Deepak Garg, Managing Director, Sany India & South Asia, “The major highlight of the announcements made in the budget for us is the big infra spending boost of Rs 7.5 lakh crore in the financial year 2022-23. Provision for Rs 1 lakh crore – 50-year interest-free loans to the state government over and above the current limit will surely put more money in the hands of the state government to increase spending on infrastructure development. Green bonds announced in the budget session also look very promising in order to reduce the carbon intensity of our economy.”

He added, “Increasing impetus given on the seven engines of growth in the Pradhan Mantri Gati Shakti programme shows the government’s commitment towards rapid 360-degree growth in the overall infrastructure sector. Some key measures announced in the budget are a definitive step towards this goal. Expanding highways by 25,000 km, which is nearly 83 km a day, will prove to be a major growth booster for our economy. Similarly, Multimodal logistics facilities were previously not given the due attention they needed but thankfully today’s budget seems to have changed this trend with the announcement of the construction of 100 cargo terminals in the next three years.”

Commenting on the Budget 2022, Sandeep Mathur, India General Manager, Business Head, India & SAARC - Construction Equipment, CNH Industrial, said, “The Union Budget has brought the focus back on Bharat. Building further on India’s infrastructure requirements will have a tremendous effect on achieving sustainable growth for the economy and will have an exceptional positive social impact. The transformative approach for economic growth in the infrastructure sector driven by seven engines – roads, railways, airports, ports, mass transport, waterways, and logistics infrastructure – is a smart move with an eye towards achieving long-term goals. The announcement regarding aligning National Infrastructure Pipeline with Gati Shakti Master Plan will certainly give an edge to the Indian economy, encouraging smooth and seamless urban development in the nation. Additionally, the government’s continuous investment in expanding the national Highway network by 25,000 km in 2022-23 by mobilising Rs 20,000 crore will also be enormously beneficial for the infrastructure sector.”

Rajan Aiyer, Vice President and Managing Director, Trimble, South Asia Region, said, “This year’s budget has opened wide opportunities for the infrastructure and construction industry, with a clear focus on building a modern and world-class infrastructure for India. We welcome the significantly increased allocation to infrastructure capex compared to last year, while the measures to speed up approvals for low-cost housing projects and additional allocation to the PM Awas Yojna will together go a long way in delivering housing for all.”

“The budget that aims to address the long-term growth prospects in a clear and precise manner. Measures such as higher infrastructure spending, expansion of the highway network, the addition of modern trains, and a focus on the rural economy will have a positive long-term impact on the manufacturing and mobility sector. The reforms to do away with old clearance systems will make it easier to do business in India and it is likely to unlock a fresh wave of investment. The focus on cleantech, policies on urban planning, battery swapping, etc. are a clear direction towards much-needed steps to meet the long-term sustainability targets. The policy push with the right levers of PLI scheme is likely to further spur the development of the entire EV ecosystem in the country,” said Harsha Kadam, Managing Director & CEO, Schaeffler India.

Said PB Balaji, Group CFO, Tata Motors, “Budget 2022 is an articulation of purposeful intent enabled by a clear action plan. Building on the excellent budget of last year, the government has wisely continued on the path of prioritizing economic growth with calibrated fiscal prudence. For the Indian automobile sector, which is a significant contributor to the nation’s GDP, the budget offers continuity and also additional opportunities to drive multi-year growth.”

He added, “Specifically, the robust increase in capex by 35.4 per cent to Rs. 7.5 lakh crore and a comprehensive investment plan for infrastructure is a significant growth booster. Additionally, the launch of the well-conceived PM Gati Shakti programme for multi-modal transport including 100 cargo terminals and investments in 25,000 km of highways, apart from investments in ports and metros is an excellent development that will help create a world-class transport infrastructure in the country. This will reduce logistics costs and transit times, increase employment and make us globally competitive with avenues for better and more efficient mobility solutions. Additionally, plans to create EV charging infrastructure including national policy for battery swapping which when combined with the already announced Automotive PLI scheme, furthers the agenda for green mobility.”

Satyakam Arya, Managing Director & CEO, Daimler India Commercial Vehicles, is pleased to see the various measures announced to boost the Road Infrastructure and Logistics sectors that should keep the Commercial Vehicles industry on a positive trend this financial year. He said, “It seems to be, taking references from the FY23 budget. It is also heartening to see a greater thrust towards improving the logistics efficiency based on digitalisation, creation of multimodal logistic parts and cargo terminals. This will not only help the logistics industry but will also provide much needed and enhanced cost competitiveness to the entire manufacturing sector.”

He added, “The allocation of Rs 48,000 crore for the PM Awaas Yojana is also a welcome move for it will have a positive impact on the commercial vehicle industry, given that 80 lakh houses are planned in FY23, for urban and rural beneficiaries under the scheme.”