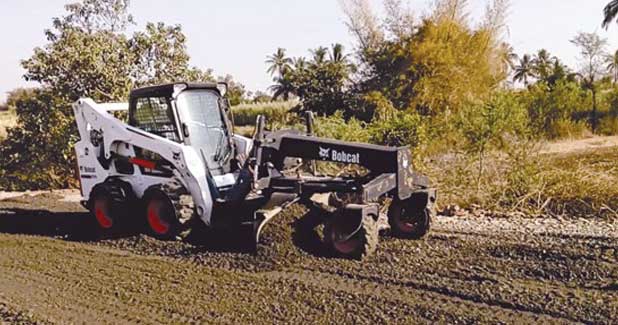 May 10,2017
Skid steer loaders are fast catching traction in Indian market. From the current size of around 550 units, the market is going to cross 1,000 units by 2018, according to industry estimates.

Skid steer loader (SSL) is a highly versatile utility machine used in general construction. They are used for material handling and movement in heavy construction like construction of bridges, elevated roads, metro rail infrastructure, tunnels to name a few where the space is restricted and SSL is an ideal option. These machines offer a practical solution for waste collection and solid waste management and find favour with governmental bodies like municipalities and corporations.

This mini equipment is fast finding traction in the infrastructure development and construction market with its convenience of use in congested and hard to reach space, and its ability to perform versatile tasks with the use of various attachments. Though the total number is less compared to other earthmoving equipment categories, it is getting popular in the market and the number is going to cross 1,000 units by 2018, according to industry estimates.

The demand for skid steers is going to grow in the coming years as many municipalities are now mechanising their various urban development and waste handling operations. Also Government's various initiatives such as Clean India and Smart Cities will drive the demand for this cute little machines. Also the awareness level among the user fraternity growing, skid steer loaders with various attachments will be the right option for an efficient and productive operation.

As the market leader in skid steer loaders, the strength of Bobcat is its wide range of SSL offered. Starting with the Bobcat S450, the range goes on with S550, S590, S650 and S770. 'Bobcat machines are engineered with the right balance between engine and pump, plus a weight distribution that delivers powerful breakout forces and faster cycle times. The design of Bobcat loaders is in such a way that there is a 70:30 weight distribution ratio between the front and the rear when the bucket is fully loaded and 30:70 weight ratio when the bucket is empty. This is the most ideal weight distribution for turning, skidding and also increases life of drive train and tyres,' says Manjunath, General Manager, Doosan Bobcat India.

Caterpillar offers a range of skid steer loaders for the Indian market. Says Amit Bansal, Sales & Marketing Director - Building Construction Products, Caterpillar India, 'Currently in India we have 216B3 skid steer loader having 635 kg of rated operating capacity. This model belongs to the category which constitutes approximately 70 per cent of the SSL industry in India. But we have several other models in our SSL portfolio.'

The future is perfect for skid steer loaders. According to Manjunath, the current market size of SSL is around 550 units and is expected to grow at a rapid pace in the near future.