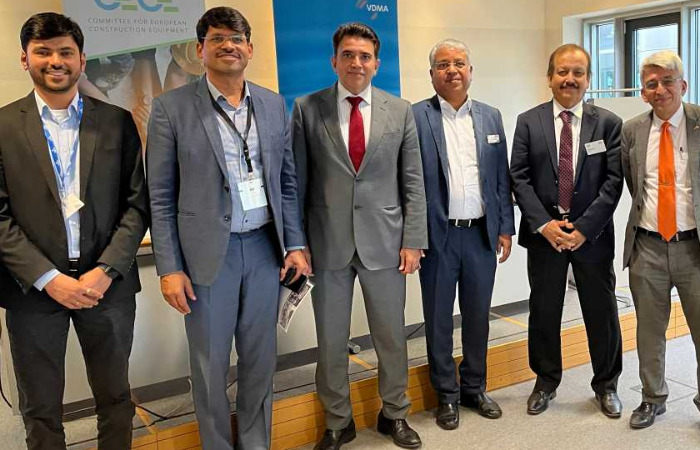 Infrastructure sector is the cornerstone of the Indian economy and plays an important role in accelerating the growth of India’s overall development. The sector covers a wide range of sub-groups namely power, roads, ports, railways, telecommunication amongst others. As India moves towards becoming a $5 trillion economy in the next 5-6 years, manufacturing is envisaged to contribute $1 trillion.

With calls for Make in India and "Atma Nirbhar Bharat" (self-reliant India), the manufacturing industry will be a catalyst for the GDP growth in the country. The aim is to encourage foreign players to manufacture in India not only for the domestic market but also for the global requirement.

During Bauma 2022 in Munich, a country special session on India named as the “Europe- India Day” was organised by the CECE, ICEMA and VDMA India on Wednesday, October 26, 2022, at the Bauma Press centre East entrance, which offered the next good opportunity to sound out new perspectives for new business.

Rajesh Nath, Managing Director, VDMA, in his inaugural speech, mentioned that the government has also enhanced and improved delivery across the whole infrastructure spectrum, from housing provision to water and sanitation services to digital and transportation demands, which will assure economic growth, increase quality of life, and boost sectoral competitiveness.

The overall infrastructure capex is estimated to grow at a CAGR of 11.4% over FY21-26 driven by spending on transport and urban infrastructure. The development in the infrastructure sector has been a catalyst for growth of the construction equipment market, which is presently valued at $6.6 billion and has potential to grow at a CAGR of around 9% to reach $12.4 billion by 2029. India’s GDP growth in the first quarter of this financial year was 13.4% which is in fact 2.8 times higher than the average GDP growth for the 20 largest economies, which is 4.9%.

Hence, India is still the good exception in a world that is already slowing down. The European Union is India's third largest trading partner, accounting for Euro 88 billion worth of trade in goods in 2021 or 10.8% of total Indian trade. The EU is the second-largest destination for Indian exports (14.9% of the total) after the USA (18.1%), while China only ranks fourth (5.8%). Also, the EU-India-Free Trade Agreement is under active discussion with both sides striving towards a closure in the coming period.

Then Alexandre Marchetta, President CECE and CEO of the Group Mecalac made his opening remarks and setting the tone for this session. He was happy to this joint initiative taken by VDMA, CECE and ICEMA. This was followed by special address from Mohit Yadav, Consul General of India, München, who was present as the chief guest. Yadav expressed that there has been a direct result of improving economic relation with the increase in Indian investments in Germany over the last few years. Indian business corporations have invested over Euro 6.5 billion in Germany’s IT, automotive, pharma and biotech sectors. More than 200 companies from India are currently operational in Germany. In¬deed, Germany has now become the third most favoured destination for Indian invest¬ment after the US and the UK.