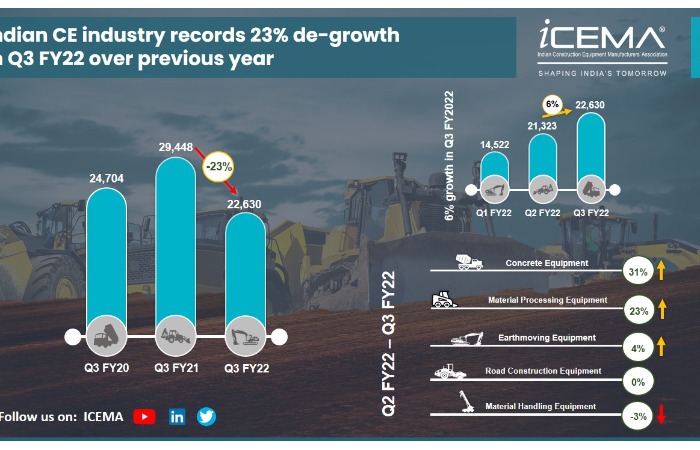 January 19,2022
On the back of slowdown in the construction activity, the Indian CE industry experienced 23% drop in sales at the end of the third quarter of the current financial year (Q3FY22) compared to Q3FY21, as per the ICEMA Industry performance report. Significant decline has been observed in growth of earthmoving equipment, material handling equipment and road construction equipment by 27%, 23% and 38% respectively in Q3FY22 vis-a-vis Q3FY21.
The construction equipment sales suffered on account of multiple factors, the most noteworthy being the significant slowdown in road construction activity hitting a 4-year low of 21.3 km/day over the period April to November 2021 compared to 25.8 km/day in the same period last year.
The construction ban from CAQM (Commission for Air Quality Management in National Capital Region) in Delhi NCR and extended monsoon in some parts of Southern and Eastern regions of the country adversely affected the growth in the third quarter in particular.
On a quarter over quarter basis CE Sales grew by 6% in Q3FY22 vs Q2FY22. This is much lower than 47% growth recorded in the previous quarter (Q1FY22) which was very subdued due to the impact of the second wave of the COVID-19 pandemic. The overall sales of the industry in the Q3 FY22 stood at 22,630 units, up from 21,323 in the previous quarter (July-September 2021). This growth was mainly led by accelerated sales of concrete equipment (31% growth) and material processing equipment (23%), while earthmoving equipment also showed positive 4% growth for the third quarter ending December 2021.
The month-on-month sales of construction equipment in both November and December has shown decline of 18% and 3% respectively, which contributed to the muted performance of the October-December 2021 quarter. The industry had anticipated a lower growth in Q3FY22, based on the continuously declining sales during the year and particularly in the last two months of the third quarter, said Dimitrov Krishnan, President ICEMA and Managing Director, Volvo CE India, while revealing the figures as per ICEMA’s quarterly industry report. He added that few other factors which continued to restrict sales growth during the quarter included increase in prices of wheeled equipment triggered by the implementation of CEV IV norms, impending elections in 5 major states and lower state infrastructure spends which too added to the woes of India’s CE industry.
Despite several challenges, the Construction Equipment industry could maintain the positive growth trajectory during the quarter, which proves the resilience of the sector. However, going forward a revival in the construction activity would be critical for maintaining the growth of the industry, said VG Sakthikumar, Convener, ICEMA Industry Analysis and Insights Panel and Managing Director, Schwing Stetter India.
The ICEMA Panel on Data and Analysis provides robust and credible market intelligence by collating, generating, and analysing the industry data. The value-added quarterly CE industry Reports is one amongst the several industry reports collated based on data shared by members.