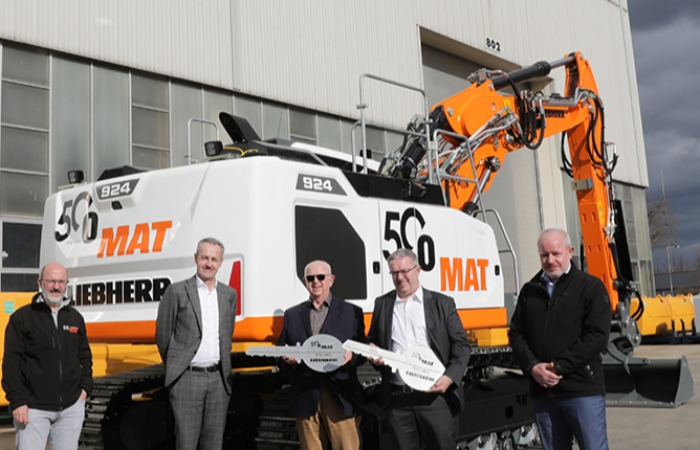 April 08,2022
In 1980, Liebherr was looking for a new partner to distribute its earth-moving equipment in Luxembourg. When Jacques Conter heard the news, he wrote a letter directly to Liebherr-Export AG. Two weeks later, the two companies started their adventure together. An alliance of two family-run groups, the partnership between Liebherr and Comat soon bore fruit.
The first machines to be sold were an A 922 wheeled excavator for Sotraroute and an LR 631 for Perrard.

Claude Conter, son of Jacques and the company’s current director, is very happy with the partnership between Comat and the Liebherr brand: “It’s a very good partnership”, he says. “These two family-run companies are reliable and stable. We consistently plough our profits back into investments that will secure our future.”
R 924 G8 crawler excavator celebrates Comat's 50th anniversary
The Conter family have chosen an R 924 G8 crawler excavator from the Liebherr-France SAS production site at Colmar. With its characteristic generation 8 design, this machine features a completely reconfigured architecture to offer even better comfort, ergonomics and operating performance.

Our Luxembourg distributor chose a custom version in its company livery and featuring a special 50th anniversary logo. Once it joins the company’s hire fleet, this machine is sure to be attracting attention very quickly on many future construction sites.
Comat and Liebherr: past and future
Since its foundation, Comat has made a name for itself with the main players in the construction sector in Luxembourg.  It has also enjoyed a high profile through its involvement with numerous quarry projects in the country.
Comat, is a valued local partner, highly regarded in its own country for its technical expertise and very fast service, but also and above all for the very close and trusting relationships that it maintains with its customers just as much as with Liebherr.
Claude Conter recalls nostalgically: “In 1990, I did several months of practical training at the Liebherr-France plant in Colmar, and that allowed me to understand the Liebherr way of thinking and working. Our technicians also regularly attend training at the various Liebherr manufacturing facilities to acquire in-depth and up-to-date knowledge of the Liebherr world.“
With over 100 employees, Comat has grown considerably in 50 years. Along with a steady, permanent customer base in its sector, this Luxembourg company launched a rental service about a decade ago. With excavators from 14 to 40 tonnes, the Comat Location fleet runs to more than 50 vehicles. It also includes wheeled loaders and crawler tractors, making up a complete range to cater for heavy demand from customers in Luxembourg. Comat and the Conter family owner have numerous projects under way, and the future looks bright for even the next fifty years!
The Liebherr Group is a family-owned engineering company offering a very diverse range of products. The company is one of the biggest manufacturers of construction machinery in the world. It also supplies high-end products and services to cater to users’ needs in many other areas. Today the Group includes more than 140 companies on all continents. In 2020, it employed more than 48,000 people and posted total consolidated sales of more than 10.3 billion euros. Liebherr was founded in 1949 in Kirchdorf an der Iller, southern Germany. Since then, the mission of Liebherr’s employees has been to win over customers with outstanding solutions while contributing to technological progress.