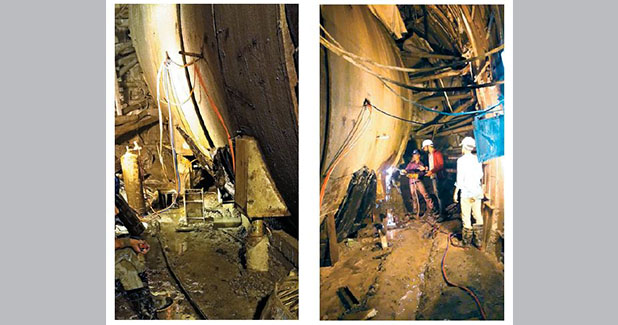 December 09,2019
HCC rescued a tunnel boring machine (TBM) stuck in Himalayas, refurbished and put back into operation to construct a head race tunnel for an NTPC hydro power project.

Public sector power company NTPC was awarded a Rs 6.35 billion contract with HCC that involved salvaging a double-shield tunnel boring machine (TBM) stuck in the earlier operation by another contractor, refurbishing it and putting back into operation to construct a 2.84 km long head race tunnel (HRT). This project is a prime example of HCC's experience in managing complex work in difficult terrain.

The project area lies within the Dhauliganga and Alaknanda valleys in the state of Uttarakhand, and the geology consists of high strength, medium to high-grade metamorphic rocks belonging to the Central Himalayan Crystalline Series. Overburden above the HRT reaches 1,100 m.

To date, three TBM trapping events have severely hampered the HRT excavation. The first trapping event occurred in December 2009 at chainage (Ch) 3,016 m at a depth of some 900 m in a heterogeneous fault zone. During trapping, the front and outer telescopic shields were jammed in and dented by major wedge slides with massive surges of high-pressure subsurface water. Two crown segments of the segmental lining immediately behind the tail-skin were broken, compounding the trapping problem. The second and third trapping events happened in February and October 2012 at Ch 5,840 and 5,859 m respectively in the same 20 m wide fault zone at a depth of some 700 m. Since then the TBM remained trapped and operations were abandoned by the previous contractor.

Expert's help in recovery
HCC was hired to complete the remaining headrace tunnel works in early 2016. In November 2016, HCC awarded a subcontract to Seli Overseas for the TBM portion of the works.

HCC and Seli Overseas have experience of working together on two hydropower projects in India; the Kishanganga project, which has seen the first successful TBM hydro tunnel in the Himalayas; and, on the Vishnugad Pipalkoti project, which is located down the valley from Tapovan Vishnugad, for which tunnelling is about to get underway.

The Himalayas present significant tunnelling challenges, especially for TBMs, due to the difficult geology, weak zones, overburden stress and groundwater. Hydro projects that have experienced difficulties with TBM applications in the past include the Dulhasti and Parbati II projects, where gripper shields were employed. The experiences led to much hesitation in using TBMs in the Himalayas, until the success of HCC's TBM drive at Kishanganga.

For the Kishanganga project, the approach to overcome the tough tunnelling challenge for TBMs was to employ a combination package of TBM technology, using a double-shield machine plus a seasoned tunnelling crew capable of working in and out of the machine underground. The miners were able to exit through special hatches to excavate and open up small bypass tunnels and release the shield when required and to ensure the continued progress of the TBM.

The same full service approach is being applied to Tapovan-Vishnugad.

Initial findings
As per HCC and Seli's initial observations, the TBM appears to have got stuck due to bypassing of interlocking systems. The TBM cutter head was totally stuck in the soft soil and cutter head along with the telescopic shield was separated from the front shield. The weight of the cutter-head made the telescopic shield tilt downwards sinking into the soft soil.

By the time recovery work on the TBM started, the entire assembly from the front shield to the tail shield was pushed upwards due to the earth's pressure. The difference in alignment from tail shield to cutter head was 1.4 m. To stop this upward movement of the assembly, the previous contractors had engaged supports from the top that had caused severe dents on the front shield, telescopic shield and tail shield.

The main challenge was to realign the TBM in a single line and bring the telescopic shield back into position.

The methodology of TBM recovery
After detailed study and discussions with client NTPC, the methodology for TBM retrieval was submitted on April 23, 2018. For correction of the alignment of the outer shield with the tail shield of TBM, free space was required to realign the TBM. In order to create this required space, a systematic excavation scheme was essential to construct the cavern in poor geological conditions and water ingress.

The work started at the tail of TBM by boring holes on concrete rings at three locations (left, right and top) for investigation and carrying out the enlargement of the cavern around the TBM tail shield. The excavation had to be done manually as the conventional method of drill and small intensity blast could not be used due to space constraints.

The total length of the cavern was planned to be 18 m in length including the transition from tunnel profile to retrieving chamber profile. The cavern was extended by 4.5 m in front of the cutter head to carry out cutter head repairs.

Due to the threat of possible collapse during the manual excavation in adverse geology, and for ensuring stability to the excavated portion, a complete rock supporting system was planned including ribs/lattice girders, plates, wire mesh and rock bolts.

Considering the safety of workers involved in the excavation, the whole cavern was subdivided into different zones of 2 m each longitudinally. The excavation was carried out using pneumatic/electric breakers. The cavern was excavated in several smaller sections (in six steps as in the diagram). Every excavation cycle was followed by proper scaling of unstable rocks in order to limit risks of the collapsing block. All works of excavation and rock supports in each zone was completed before advancing to the next adjacent zone of 2 m.

The entire excavation and stabilisation of the cavern took six months to complete.

Realignment of the TBM
Once the cavern enlargement was completed, the cavern supports on the top and the circumference of TBM were removed, thus making the TBM free from all supports. The cavern inverts were cleaned. The specially designed hydraulic jack supports had by then been welded on the gripper shield and the front shield of TBM.

After positioning the TBM on the double-acting hydraulic jacks, with the help of a hydraulic power pack, the TBM was lifted to 40 mm. Thus the load of TBM was transferred to the hydraulic jacks. Additional temporary mechanical support for the TBM was provided as a secondary support for carrying out the job under safe conditions.

After transferring the TBM weight onto the double-acting jacks, the muck below the TBM shield/cutter head was easily accessible and safely removed. Once the muck below the TBM shield was removed, an invert concrete cradle was constructed below the shield. A cavern footing was also carried out from the gripper shield until the cutter head. In between the shield and the concrete cradle, a 300 mm suitable foam material was placed to protect the TBM.

On completion of shield invert cradle concreting, the TBM was re-aligned by adjusting the position of TBM shields acting on the hydraulic jacks. After realigning the TBM, the hydraulic jack supports were removed and TBM refurbishment and cutter head maintenance were carried out.

Since the TBM was not in operation for almost five years and was damaged to a certain extent in trapping, various spare parts including cutter head drive, power supply, hydraulic system, thrust cylinders, shield parts, cooling circuits, lubricants, water circuit, air circuit, electronic parts, bearings, etc were procured from Herrenknecht and were replaced over a period of eight months. The total value of these spare parts was to the tune of Rs 200 million.

The refurbishment of the TBM was followed by commissioning and testing. Subsequently, the TBM was moved up to the excavation face to commence the operations.

Stabilising the excavation face
To begin the TBM operations, it was vital to carryout stabilisation of the loose soil face in the fault zone of approximately 20 m in front of the TBM cutter head. It was systematically done first by carrying out cement grouting (Fig 1) in the face. This was followed by chemical grouting and SDR insertion up to 5 m in the boring area (Fig 2).

Now, the team is proceeding with the boring at slow speed. The main boring speed will be achieved after crossing the fault zone by continuous monitoring of the crown by SDR and chemical/cement grouting. Another two fault zones are expected in the remaining tunnel as per the geological data.