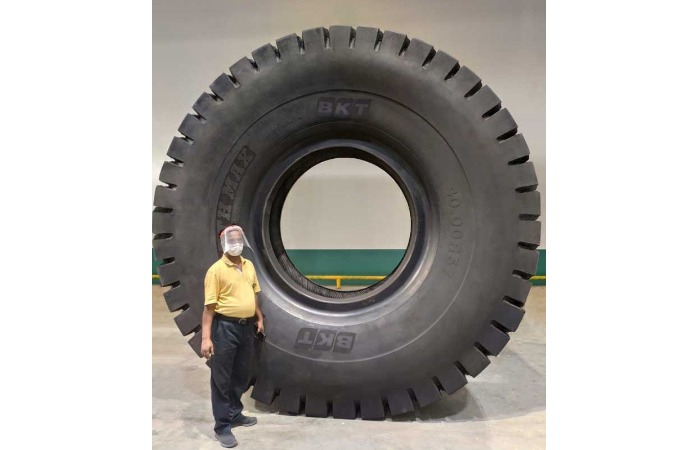 OTR tyres on the move

January 14,2021
With the continuous growth in construction and infrastructure projects both in private and government sector, the demand for construction and earthmoving equipment is consequently increasing in India. After a prolonged slowdown thanks to the pandemic conditions, the market is picking up now. As the construction projects especially roads and highways opening up and new revival in mining visible, activities are gaining momentum in construction and mining segments while the agri segment is already booming. All these are driving the growth prospects of the off-the road (OTR) tyre market in India.

According to Karan Chechi, Research Director, TechSci Research, in 2020, Indian OTR vehicle tyre market stood at 9.60 million units in terms of volume. “The share acquired by the agriculture machinery in India is 59.51 per cent by 2020. The share of mining and construction segment stands at 37.24 per cent and is expected to increase in the coming years.”

As there are a lot of developments left in Indian infrastructure sector, construction will see more demand in the coming years. Growing needs in the power and manufacturing segments will require coal and minerals in large quantity which will drive demand for mining activities. All these lead to an increased use of off-highway equipment which subsequently improves the prospects of OTR tyres.

According to Chechi, increasing population and rising urbanisation are boosting the infrastructure projects landscape. With upcoming and ongoing projects, the construction sector is the third-largest contributor to the economic growth. On the demand trend in construction, he adds, “The Indian government is taking steps to boost construction activities across the country. The National Infrastructure Pipeline (NIP) plan, the Affordable Rental Housing Complex (ARHC) scheme and investments in the industrial sector open great opportunities in the construction sector in 2021.”

On mining prospects, Chechi observes, “The Ministry of Environment has approved 10 coal mining projects in different states of India. The ministry states that the projects will have an output of 160 million tonne annually. These projects are going to bring a quick rise in the demand for OTR vehicles, which in terms is directly going to boost sales of OTR tyres in OEM as well as replacement segments.”

PK Ganguly, Head – Marketing (Domestic Sales), Balkrishna Industries, feels that the mining and construction equipment segments are fast expanding to be a lucrative market for OTR tyres. “Privatisation in the Indian coal segment has also opened many new avenues for the OTR tyre industry.

Ankit Maheshwari, Head – Sales & Marketing, Trident International sees positive impact on the government’s push towards ‘Atmanirbhar Bharat’ and development of new infrastructure projects. The auction of coal blocks to private players for commercial coal mining on revenue sharing model can also create demand for OTR tyres in India, according to him.

The recent push in mining activities has created momentum in mining equipment sales as there are some bulk orders for heavy earthmoving and mining equipment by various miners in the country. This is going to create demand push in OTR segment from OEM as well as replacement markets. According to Ganguly, with the mining and industrial construction segment witnessing accelerated demand in India, there will be a high demand for new equipment, escalating OEM sales. While on the demand from replacement market, Chechi feels, “The replacement market is rising with continuous increase in the fleet of OTR vehicles.”

According to Maheshwari, the recent investments in construction and mining sectors will require more off-the-road equipment which will boost demand of OTR tyres.

In Indian OTR sector, radialisation is still at its nascent stage. “Indian OTR markets are mostly into bias and not yet ripe for radials,” says Ganguly. However, with mining segment picking up which demands for more radial tyres, radialisation can pick up in future. According to Chechi, the topmost off-highway segment that is witnessing high demand for radial tyres is mining sector, predominantly on account of expanding fleet of mining vehicles. Considering the severe operational conditions in underground mines, radial tyres are the only solution to meet the customer’s requirement, according to Ganguly.

According to Chechi, OTR tyre manufacturers are implementing technical innovations in their tyres such as radialisation, tyre pressure monitoring system, cut and chip resistance, etc, to keep up with the expectations of the equipment manufacturers. “Modern OTR tyres are equipped with high abrasion resistance and fuel- and energy-efficient features,” says Chechi.

According to Ganguly, an emerging design trend for the OTR segment is an ever-expanding shift towards radial tyres, from bias range which has led to several breakthrough technologies in the domain. Furthermore, he adds, “as giant earthmoving machines have had a steady growth in demand, the large and ultra-large tyres that cater to this segment have witnessed great innovation and re-modelling in recent years, to offer new-age solutions for the heavy-duty equipment.”

According to Maheshwari, the emerging technology trends in OTR tyres will be towards fulfilling the requirement of higher load carrying capacity, faster speeds, low rolling resistance with the advent of EVs and value-added technology like connectivity/IoT-embedded sensors to make the tyres more durable, efficient, long lasting and smart.

In spite of the Covid-19 impact on the industry and economy, the stakeholders in the Indian OTR market are confident on the demand push expected in the coming years on the fact that a lot of infrastructure construction activities are underway and mining sector is opening up for private players with more focus on sustainable mining practices. Chechi says, “The OTR tyre market in India would continue to grow in 2021 and in coming years as India plans to invest $1.4 trillion on several infrastructure projects by 2025 including projects related to ports, railway, roads, etc. Government of India has also partnered with Japan for infrastructure development in north-eastern states of India. All these activities are going to increase the use of OTR vehicles in the country over the course of next 5-10 years, which is further going to augment demand for OTR tyre in OEM as well as replacement segments.”

According to Ganguly, the coal mining segment in India is expected to grow at a higher pace to meet the country’s growing energy requirement and this is all set to drive a new wave of expansion and growth for the industry in the coming year.

Maheshwari adds, “We believe that the worst is behind us. All high frequency indicators and macro trends are indicative of strong revival of growth in 2021 and 2022. We plan to be a part of the infra push and the projects laid out by both public and private sector.”

While agriculture sector is already pushing demand for OTR tyres, the mining sector is going to be the next demand puller for OTR tyres and construction equipment is expected to see a steady demand trend in the coming years.