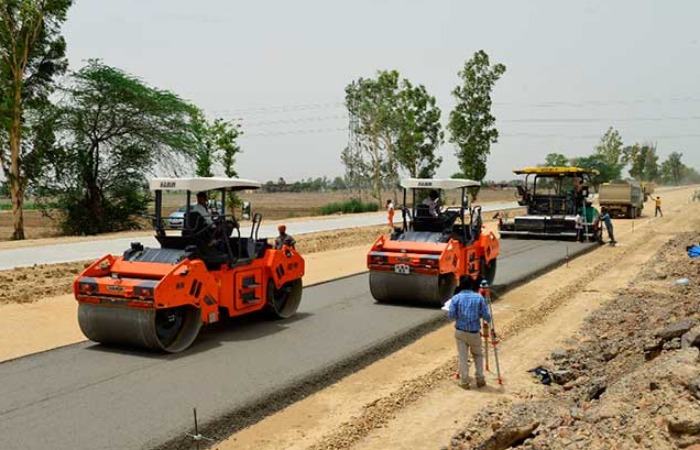 October 03,2020
Roads and highways sector is considered to be the most vibrant infrastructure segment where a lot of activities ongoing consistently for a long time. While other construction segments see ups and downs, the development of roads and highways has been happening in the country in a sustainable manner. Though the fiscal 2019-20 saw some dip in actions, towards the end of the year, things were picking up. But then the COVID 19 pandemic has slowed down the whole construction market in India, beginning 2020-21. While the country is going through the unlocking period after the almost standstill situation in April and May this year, the road equipment industry is looking at the road to recovery for the equipment market.

Road construction scenario
According to recent reports, in spite of the slowdown, the Ministry of Road Transport and Highways (MoRTH) has surpassed its target for construction of national highways in the country till August 2020. During April to August this year, 3,181 km NH length was constructed against the target of 2,771 km for this period. Further, 3,300 km length of NH works have been awarded in this year till August, which is more than double of the 1,367 km during the same period last year. Sanctions were issued for construction of 2,983 km of NHs all over the country during this period. To widen and revamp 1.25-lakh km of roads, government has approved the launch of PMGSY Phase-III at an estimated cost of Rs 802.50 billion. The government set a target of constructing roads worth Rs 15 trillion over the next two years. In this scenario, how do road equipment players respond to the market realities?

According to Ramesh Palagiri, Managing Director & CEO, Wirtgen India, there was a slowdown in awards and construction of road projects in the last one year as NHAI/MoRTH is trying different ways by which funding can be arranged for the growth of the highway sector, due to the tight financial situation with the government. The Ministry is looking at ways to monetise the existing operational highways through the Toll Operate Transfer (TOT) model and also to rework on the BOT model to make it more attractive. On the machinery sector, he feels, “There is a lot of uncertainty with regards to demand of machinery. As of now, we cannot be sure of the total impact and the timeline, before things come back to normal. Our estimate is that it would take at least 6-12 months before the situation returns to normal. So, we are having a relook at all our plans and doing the necessary adjustments to our business.”

Dimitrov Krishnan, Managing Director, Volvo CE India has a different perspective. According to him, the road construction industry has performed well in India for many years now and Q1 of fiscal 2020-21 is no exception. “Over the past two to three years, the road construction segment has contributed close to 60-70 per cent of all construction equipment demand in India. While there has been a negative impact of COVID-19 that is impacting all industries, sales of compactors and pavers at Volvo CE have been very resilient. This has especially been the case after the relaxation in lock-down measures with many road projects restarting.”

Puneet Vidyarthi, Brand Leader, CASE India is banking on the government announcements and initiatives to reinvigorate the sector and the economy. “The effect of these initiatives remains to be seen but we’re hopeful of a full recovery,” he adds.

The Ministry of Road, Transport and Highways (MoRTH) led by Hon’ble Minister Nitin Gadkari, has given a clear indication that there will be a renewed thrust on road construction. Vivek Hajela, General Manager - Construction Equipment Business, Larsen & Toubro observes the market vibes, “In the months of April and May 2020, sales were low due to nationwide lockdown. Since then month on month, the sales have improved. In fact, for the months of July and August 2020, sales of compactors have surpassed the corresponding months last year by around 15 per cent. This could also be due to pent-up demand. However, there are positive signals that normalcy is restoring in the road construction sector. The labour force at most sites are also returning to work and the speed of activity has picked up.”

COVID-19 resulted in an extremely challenging period, which nobody could have planned for. All infrastructure and construction projects had come to a standstill in the months of April and May due to the unforeseen lockdown. Consequently, says Jasmeet Singh, Associate Vice President – Corporate Communications and External Relations, JCB India, “this had an adverse impact on the demand for our products. With businesses slowly coming back to normal and infrastructure as well as road projects resuming, we are now seeing green shoots in the sector. While this year has been quite challenging, we are hopeful by the revival witnessed in the months of June, July and August.”

Usually, customer sentiment is seen going up during the second half of the year, which is considered to be a festive season in India. However, according to Singh, it is too early to predict conclusively. “The situation is changing every day and it is quite uncertain as everything depends on how the pandemic plays out. For instance, amid the rising number of coronavirus cases, a few state governments have already started considering re-imposition of restrictions. If any part of the country goes under a lock down once again, it would have a cascading effect on the overall supply chain. Hence, it is important to see how the remaining year goes ahead. It is critical that the momentum remains intact.”

Ankur Tiwari, Senior Manager – Sales, Ammann India sees demand scenario of pavers and compactors subdued due to the complete lockdown in the first quarter (Q1) this year, compared to historical levels in April. “But the market recovered at a steady pace in the next two months in the quarter and we see green shoots of recovery as the pace of project awards accelerates,” he feels.

According to Rahul Joshi, Marketing and Product Head, Mahindra Construction Equipment, in 2019, India scored the highest length of roads constructed, both in highway and rural sector. “The Q1 this year started with the sudden nationwide lockdown which definitely impacted the demand in all sectors, so also road machinery. But you will find that as and when the lockdown is over and the market is opened up, the business is coming back to normal. We are very confident that the MoRTH will work towards beating the record of 2019 and also to cover the losses happening in the initial quarters of 2020. By end of the FY 21, we are sure the business will be close at par,” Joshi asserts in full confidence.

Sanjay Saxena, Senior Vice President & Head - Heavy Equipment Business Unit, Sany Heavy Industry India is positive on the MoRTH execution plans of a total of 22 green expressways comprising 7,500 km, at a cost of around Rs 3.10 trillion in the next few years. He observes, “Government is giving due importance and support towards road construction projects and we see this as an important step in the overall growth of our country. This will certainly increase the demand and sale of our equipment in the last two quarters of fiscal 2020-21.”

According to Tiwari, there is a sharp decline in concrete roads since 2018 due to cost escalation per km compared to asphalt and not meeting the construction quality as per the government expectations. The demand for better quality on road construction has also been increasing with enhanced standards on defect liability for the asphalt roads that can be increased to 10 years from the present five years. However, he adds, “Irrespective of the type of roads constructed, Ammann Group is fully prepared to serve the needs of the industry. For concrete roads, we have within our portfolio of equipment concrete batching plants globally, and pavers, which are used for compacting DLC (Dry Lean Concrete) layer just below the PQC (Pavement Quality concrete) layer.”

Recycling is picking up in road construction, especially in rehabilitation and reconstruction of roads, a lot of milling and recycling activities are taking place. Wirtgen being a major player in this field has introduced the cold milling and cold recycling and these two technologies are reasonably well accepted in the market. Palagiri says, “Soil stabilisation is also becoming very popular and all these technologies result in saving resources, faster construction and cost economical solutions. The Cement Treated Base or subbase (CTB or CTSB) not only reduces aggregate requirement, but also ensures stronger foundation and reduces layers. The cold recycling reuses 100 per cent of asphalt pavement material and only addition is bitumen 2-3 per cent which rehabilitates the asphalt pavement to its original properties.”