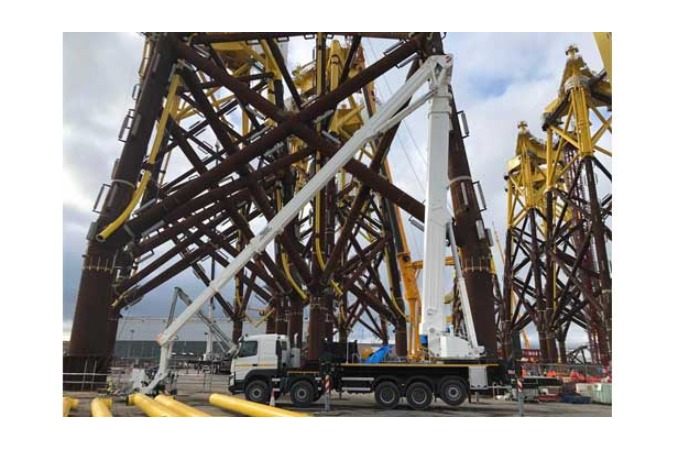 Use of aerial work platforms (AWPs) is gaining importance in the changing operational conditions. After the onset of Covid-19 pandemic and the subsequent lockdown, the overall operations came to a standstill for a couple of months and then started recovering with the easing of lockdown. Currently, most of the industrial and market operations are back, though the pandemic is still there. In the pandemic scenario, availability of labour has become an issue in many areas. AWPs play an important role in infrastructure sector, with a higher scale of safety and productivity compared to traditional way of working at heights using more manual force.

Aerial work platforms are used in construction, transportation, and other infrastructure and government projects. These are safe and convenient devices, which make them useful for construction and maintenance operations.

AWPs are being used across the segments including infrastructure, construction, power, oil and gas, facility management, maintenance, buildings, hospitals, malls, hotels, etc. Wherever people need to work safely at heights, AWPs are necessary. In India, the use of AWPs is still in its nascent stage. Nevertheless, with the growth of awareness, people have started preferring AWPs to traditional methods of accessing heights since it is directly related to safety and productivity.

Sujai Pujari, Founder & Director, and Balasubramanian Ganapathy, CEO, Daedalus Lift & Access Equipments, said, “The current demand for AWP in Indian market is in a few hundred and it is growing over 40 per cent year-on-year (y-o-y), including new and old machines. The demand is continuously on the rise as many of the Indian origin companies are demanding safe solutions to work at heights. AWP gives complete safety to work at heights. Mainly rental companies, power sector (generation, transmission and distribution), construction companies, food processing units, manufacturing companies, facility management companies, etc, play a major role to drive continuous demand of AWPs.”

In India, the AWP market is dominated by rental segment with a large share of used equipment. The end-user market generally own new machines being imported. According to Ray, the estimated share between end user owned vis-a-vis rental segment is 30 per cent and 70 per cent, respectively.

The Covid-19 pandemic has deeply affected all business sectors across the world including the AWP segment. The pandemic and the extended lockdowns that followed have punctured India’s economic growth in Q2 and Q3. According to Ray, the economy is likely to witness it’s sharpest-ever contraction in 2020. “However, the bright side is that in the past three months, things have started becoming better and the demands are picking up again, which is an encouraging site,” he adds.

About the recover path, Ray feels that the year 2021 would be a year of challenges and consolidations. “The recent growth momentum is unlikely to be sustained, and we expect economic activity to return to pre-Covid levels only in 2022,” he adds.

With industrial activities picking up gradually, equipment demand is on the rise. Ray observes, “We expect the demand of AWPs to pick up in the coming months. With the increase in the pace of activities across sectors, the requirement of AWP would see an increase. We are already noticing the trend since the past two months, which is a heartening trend.”

On a positive outlook

Says Pujari, “We have the advantage to create awareness of AWPs in the Indian market by showing the live demonstrations in our factory as well as on-site demonstrations. We believe that personal experience matters a lot in taking decisions in the case of AWPs. We have a pan-India distribution network as well to reach out to maximum customers and give them proper AWP solutions. In addition, we conduct training sessions for our customers and distributors to make them comfortable in handling AWPs.”

Though the Indian AWP market is still in its infancy, there is a lot of room for growth in the coming years. With many mega projects coming up, there will be requirement of advanced machines where AWPs will play a major role for productive and safe operations at project sites. Traditional equipment and conventional methods will pave the way for AWPs.

The changed market conditions demand for a very new approach focusing more on technology and innovation. In the changing scenario, it is expected that AWPs could play a more important role in the country’s infrastructure creation and maintenance.