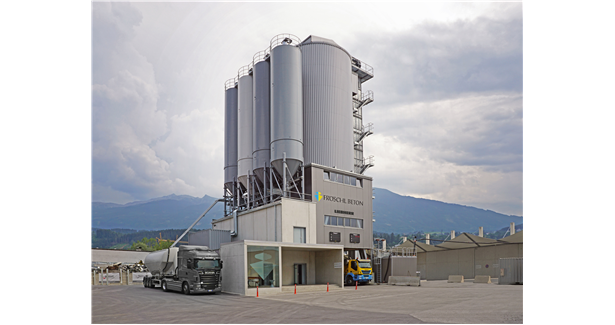 November 04,2019
Fr?schl Beton, Austria?s leading ready-mix concrete (RMC) firm has added the Liebherr Betomat-type mixing tower to fulfill customer requirements. The Fr?schl Beton company has been supplying construction sites in the Innsbruck area (Austria) with ready-mixed concrete for many years. Their 45 year old mixing plant was technically obsolete and no longer met the standards of today. After an extensive planning phase, Liebherr's Betomat concept was chosen because it enables the operation of two completely separate mixing plants within one mixing tower, according to the company.

The Betomat holds up to 600 cu m of stone in nine silo chambers. The mixing tower is fed with aggregates via two charging hoppers and a powerful bucket elevator with an hourly output of 200 cu m/hr. The plant has seven silos for a binder supply of around 840 tonne.

The new mixing plant is equipped with two mixer systems: a ring-pan mixer with agitator system and a double-shaft mixer. This means that normal standard concretes as well as high-performance and special concretes can be produced efficiently. When in operation with both mixer systems, the plant achieves a possible output of around 160 cu m of compacted fresh concrete per hour. The tower is equipped with two lanes. Separate weighing lines where two vehicles can be loaded simultaneously with different types of concrete make the mixing plant highly efficient and flexible.