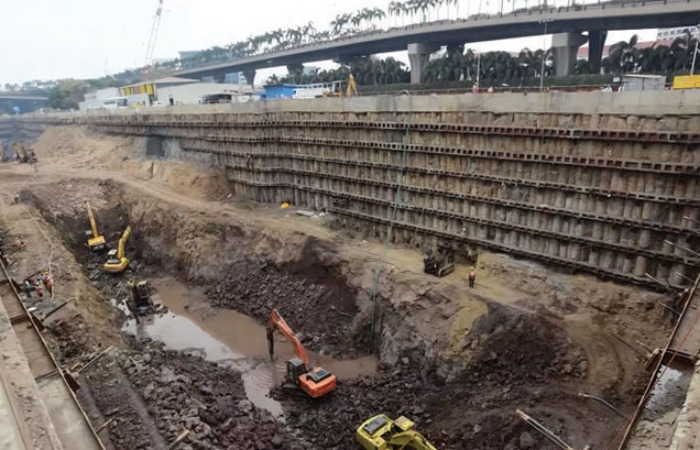 Th e recovery in the CE industry has been surprising and sharp since July 2020. While part of the growth is optical, coming on a low base of the year, early recovery in the rural economy and strong road activity have spurred growth in the industry.

Roads and highways will continue to play a key role in aiding the growth of the CE industry. Th e government is giving a massive push to infrastructure development by allocating about $1.4 trillion to be invested until 2025. Also, about $350 billion is expected to be invested in road infrastructure in the north-east region during 2020-25.

Creating modern infrastructure and replacing older inefficient systems will be driven with a much higher regard to climate change in the future, especially in the European and North American markets. Increasing urbanisation will also drive market growth – by 2050 close to 70 per cent of the world’s population are expected to live in urbanised areas, up from a little over half (55 per cent) today. Big machines don’t always work well in inner cities, so one product category we see growing fast is compact equipment, especially mini excavators, and compact tracked loaders. The great unknown is legislation: if emission, noise and transport regulations toughen or harmonise quickly, the replacement cycle away from traditional diesel power combustion engine into new electromobility will accelerate.

Rajesh Nath, Managing Director, VDMA India, said, “Private investment in infrastructure is expected to increase from Rs 8.8 lakh crore in the 11th FYP to Rs 26.8 lakh crore in the 12th FYP, with the last year alone of the 12th FYP period (fi scal year 2017) attracting private investment of Rs 8.7 lakh crore. More than 80 per cent of private-sector spending will continue to focus on four sectors: telecom, electricity, roads and bridges, and renewable energy.

Over the next 20 years, it is estimated that $650 billion investment is required in urban infrastructure. Of this, almost 45 per cent is required for development of urban roads. To boost urban infrastructure across the country, the government has initiated numerous measures and has allocated almost $2 billion under Jawaharlal Nehru National Urban Renewal Mission (JNNURM). Th e government has also launched the Urban Infrastructure Development Scheme for Small and Medium Towns with an outlay of $1 billion to address infrastructure needs of small towns and cities.

Additionally, there is a renewed push towards public-private partnerships (PPP) in the sector.

Delhi-Mumbai Industrial Corridor (DMIC) is an ambitious Infrastructure programme conceptualised with Japanese government and aiming at developing new industrial cities as “Smart Cities” and converging next generation technologies across infrastructure sectors. Projects worth investment of $200 billion have already been approved under DMIC. Success of DMIC has prompted many similar corridors including Bangalore Chennaicorridor, etc.

Anand Sundaresan, Managing Director, Ammann India, said, “Th e Union Budget 2021 gets a tick mark on all the important boxes. It is very Positive and progressive. With announcement of huge investments on infrastructure projects including various road projects and rural development projects. If implemented as planned the construction equipment industry in India will easily reach the market size of over $25 billion by 2030.

This would be three times the current volume.”

Having said that the construction equipment industry would need further support, from the government in stabilising the steel prices and making them available at reasonable price to keep the equipment cost under control.

Also a well-defined vehicle scrappage policy, which was announced recently, can help create an industry of its own with a business opportunity of $6 billion (Rs 43,000 crore) a year, say automobile sector executives and experts.

It could generate fresh employment and trigger economic growth, and also act as a critical factor to revive the automobile market that has been hit by a prolonged slowdown, they said. Finance minister Nitin Gadkari has said this month that the policy would soon be put before the Cabinet for approval. The government expects recycling of metals like steel, copper and aluminium from the scrapped vehicles to help reduce their imports.

Getting the roads rid of old vehicles would also help lower pollution and the government’s oil bill, as the new vehicles replacing the old ones would be more fuel efficient.

An HDFC Bank study has estimated the market for vehicle scrappage and recycling at $6 billion. According to it, nine million vehicles could go off roads by fiscal 2021 and 28 million by 2025, largely comprising two-wheelers. It would reduce carbon dioxide emission by 17 per cent and cut particulate matter in air by 24 per cent. Also, if half the Bharat Stage-II and III vehicles go off the roads, it would save 8 million tonnes of oil a year.

Growth drivers
Growing real estate sector: The Indian real estate market is expected to be valued at Rs 12,094.2 billion by 2022. With a steady demographic shift propelling its explosive growth, this too will result in a construction equipment demand spike. Predilection towards mechanisation over manual labor is apparent due to its costreduction and time-optimisation. Even in scenarios such as repairing sinking buildings, there will be increased demand for backhoe loaders, compaction equipment, crawler excavators, mobile cranes, and wheeled loaders.

Accelerated public-private partnership projects in India: India ranks second to China in publicprivate partnership (PPP) projects. TheMinistry of Road Transport and Highways has planned to construct six-lane roads under the Golden Quadrilateral program, which will require an investment of Rs 335.9 billion. Th e Golden Quadrilateral project, which aims to construct 5,847 km of roadways in the country in order to connect the 4 metropolitan cities to each other, will boost the demand for construction equipment.

Increased mining activities:
Staggering growth in the production of coal, iron ore, and other resources has led to the mechanisation of mining activities. Th is will lead to an increase in the demand for mining equipment such as jaw crusher, ball mill, trapezium mill, vertical roller mill, sand washing machine, crushing plants, mobile jaw crushing plants among others.

Relaxed FDI norms to boost construction deals: Th e government has rolled out several policies to allow infrastructural development in India. Th ey have relaxed FDI regulations in the construction sector by removing two major conditions related to the minimum built-up area and capital requirement. Moreover, the policy will allow projects under construction to have access to FDI. Th e removal of the lock-in period of three years will allow more overseas players to invest. Such increase in foreign investments will create signifi cant employment opportunities and demand for construction equipment.

Recent trends
Adoption of robotics in the construction industry: With the pace of infrastructure development in India, greater reliance on robotics technology can help tackle the complexities of megaprojects. According to Velprakash K, National Director at JLL India, bulldozer automation systems and cutting, stacking and packaging materials and welding structural frames using robotics are increasingly becoming a common feature across large, complex construction projects.

Mundane repetitive tasks such as lift ing, shift ing, unloading materials can be done with automation while achieving greater effi ciency. Also, in work environments such as mining or tunneling or places where extreme environments and weather conditions are highly unfavorable, adopting these technologies makes tasks easier.

Use of telematics: CASE, a construction company in 2018, launched an advanced version of its eagle eye telematics solution that was developed with Bosch at the Bauma Conexpo India. It will allow live tracking for the operating machine and assist in geofencing, which will assign a predefi ned space beyond which machines will stop working.

Doing so will alert the user about any attempted theft , device tampering, and unauthorized usage.
Autonomous construction vehicles:
Several companies are innovating autonomous vehicles like robotic tractors, mining equipment, and specialized non-road vehicles. Th ese are likely to debut in India, even before autonomous cars. For instance, Ati Motors is building an autonomous cargo vehicle that will run inside large factory complexes and can replace manual trolleys carrying heavy parts. Another Bengaluru based company, Flux Auto, is building an autonomous truck capable of working on highways.

Challenges
Regulatory issues, environmental concerns, and delays in project approval hamper construction projects, and limits the sales of construction equipment in India. Mining activities in Karnataka, Goa, Meghalaya, and Orissa are closed by the order of the Supreme Court of India in 2010. Lack of environmental clearance has caused projects of Rs 2,696.98 billion, to be left in the lurch.

Furthermore, 200 major infrastructure projects have been delayed due to the land acquisition bill.

Project bottlenecks lead to an increase in the budget due to unforeseen expenses, a slowdown of work processes as per project timelines among others.

Th is leads in turn delays the execution of projects and restrictirestricting construction equipment demand.