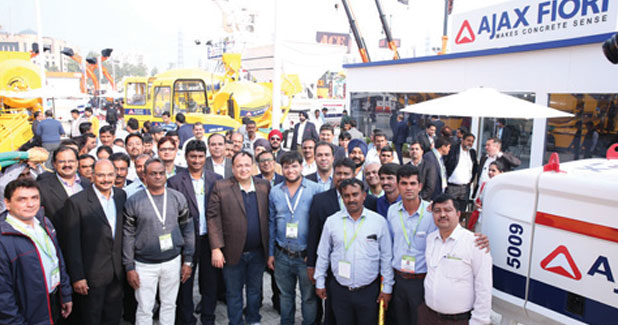 January 16,2019
AJAX being associated with BC since its inception in India has always used the platform wherein the customers are exposed to its wide-ranging product portfolio, technological advancements and commendable services. In the latest edition of bauma CONEXPO INDIA, Ajax Fiori launched three new products in the presence of its esteemed customers and various stake holders.

CRB 20 batching plant
Rajesh Agarwal of Sapna Construction, Indore, Madhya Pradesh launched the CRB 20 batching plant with an output of 20 cum/hr, which offers a low investment and high returns in terms of quality and performance. The CRB 20 comes with a planetary mixer for optimum homogeneity, and concrete discharge is fed directly to the concrete pump.

The output and size of the pump is designed such that it can be optimised with AJAX Argo SLCM for placing concrete at the site.

Partnership with GS Caltex
Going forward, AJAX engaged a new partnership with GS Caltex and introduced 'Hydro Power Plus Oil', a specially formulated hydraulic oil for AJAX by GS Caltex for its Argo SLCM variants to enhance the machine performance. The 'Hydro Power Plus Oil' was officially launched at AJAX stall in the presence of Jagadish Bhat, CEO of Ajax Fiori Engineering (I); Rajesh Nagar, Managing Director of GS Caltex (I); Jayanta Ray, General Manager of OEM and Industrial, GS Caltex (I); along with the representatives from both companies.

AJAX also displayed its AF7 XP transit mixer and A25ZX boom pump. Visitors from across the country had a glimpse of AJAX's offerings in concreting equipment space encompassing all the verticals of concreting viz, production, transportation, and placement were displayed.