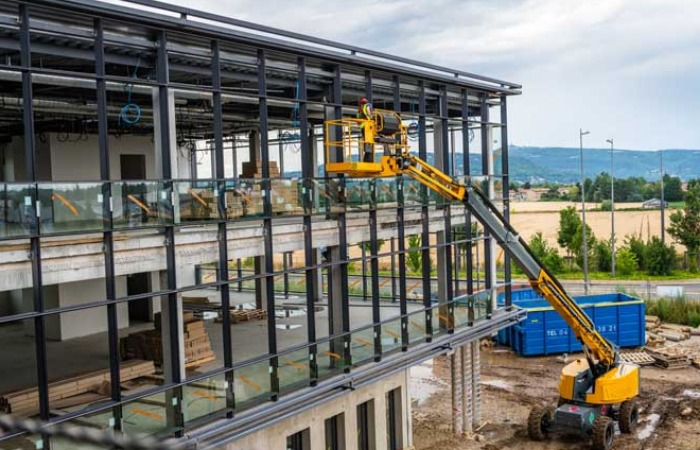 AWPs for safe and reliable operations

January 13,2021
Use of aerial work platforms (AWPs) is gaining importance in the changing operational conditions. After the onset of Covid-19 pandemic and the subsequent lockdown, the overall operations came to a standstill for a couple of months and then started recovering with the easing of lockdown. Currently, most of the industrial and market operations are back, though the pandemic is still there. In the pandemic scenario, availability of labour has become an issue in many areas. AWPs play an important role in infrastructure sector, with a higher scale of safety and productivity compared to traditional way of working at heights using more manual force.

Applications trends
AWPs are being used across the segments including infrastructure, construction, power, oil and gas, facility management, maintenance, buildings, hospitals, malls, hotels, etc. Wherever people need to work safely at heights, AWPs are a must. In India, the use of AWPs is still in its nascent stage. But, with the growth of awareness, people have started preferring AWPs over traditional methods of accessing heights since it is directly related to safety and productivity.

According to Manoj Rawat, Country Manager - AWP, India & SAARC Region, Terex India, currently, industrial maintenance has been driving the demand as most of the construction sites are impacted by Covid-19 pandemic.

Market scenario
In India, the AWP market is dominated by rental segment with a large share of used equipment. The end-user market generally own new machines being imported. According to Ray, the estimated share between end user owned vis-a-vis rental segment is 30 per cent and 70 per cent, respectively. Rawat is of the view that “Usually, rentals with around 80-per cent share dominates over retail sales when it comes to new machine sales. But this year it has changed a bit with almost equal share between rentals and retail due to Covid-19 pandemic.”

Pandemic impact and recovery
The Covid-19 pandemic has deeply affected all business sectors across the world including the AWP segment. The pandemic and the extended lockdowns that followed have punctured India’s economic growth in Q2 and Q3. According to Ray, the economy is likely to witness its sharpest-ever contraction in 2020. “However, the bright side is that in the past three months, things have started becoming better and the demands are picking up again, which is an encouraging site,” he adds.

About the recover path, Ray feels that the year 2021 would be a year of challenges and consolidations. “The recent growth momentum is unlikely to be sustained, and we expect economic activity to return to pre-Covid levels only in 2022,” he adds. Rawat sees AWP industry now recovering and utilisation rates of fleet owners are going up with each passing month. “The industry has reached 70 per cent activities of pre-Covid levels,” he says.

Market opportunities
With industrial activities picking up gradually, equipment demand is on the rise. Ray observes, “We expect the demand of AWPs to pick up in the coming months. With the increase in the pace of activities across sectors, the requirement of AWP would see an increase. We are already noticing the trend since the past two months, which is a heartening trend.” Rawat adds, “We see a lot of opportunities and growth in the AWP market post-pandemic scenario on account of demand being driven by time-bound mega projects where safety and productivity shall be equally important.”

On a positive outlook
Though the Indian AWP market is still in its infancy, there is a lot of room for growth in the coming years. With many mega projects coming up, there will be requirement of advanced machines where AWPs will play a major role for productive and safe operations at project sites. Traditional equipment and conventional methods will pave the way for AWPs.

According to Rawat, Indian AWP market is still evolving and current market size is not indicative of future potential. “I have no doubt that Indian AWP industry shall grow exponentially going forward. The growth drivers – mega projects, safety and productivity requirements at job sites shall drive the demand to next level.” According to him, rentals didn’t invest much in 2020 but it is going to change next financial year.

The changed market conditions demand for a totally new approach focusing more on technology and innovation. In the changing scenario, it is expected that AWPs could play a more important role in the country’s infrastructure creation and maintenance.