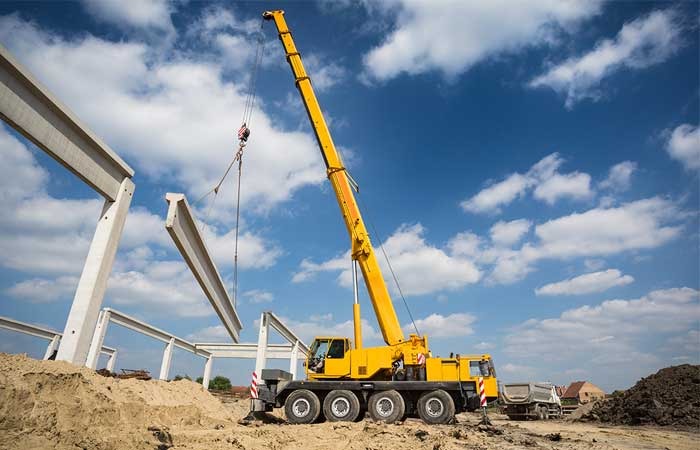 September 02,2021
Mobile cranes are the third-largest selling equipment type in India after backhoe loaders and hydraulic excavators. According to an Off-Highway Research report, sales of these machines hit an all-time high of nearly 12,000 units in 2018. Among the total mobile crane sales, pick-and-cranes constitute more than 90 per cent and the 96 per cent pick-and-carry cranes sold are of Indian origin. The sales of pick-and-carry cranes have increased by around 41 per cent during 2016-18.

Use of heavy duty mobile crane in Indian industries is a sign of increase in investments in construction, cement, steel, wind and power sectors. Despite uncertainties, the India crane market is expected to exhibit moderate growth during 2021-2026.

Use of heavy duty mobile crane in Indian industries is a sign of increase in investments in construction, cement, steel, wind and power sectors. The market for all terrain cranes is predicted to accelerate owing to the expansion of cement plants, construction industry, infrastructure projects and the increased business potential of ship building and repair industry. Also, the increasing competition in the market is expected to drive further the crane rental rates resulting in overall growth of all terrain crane revenue share.

The India crane market is primarily driven by the increasing construction and infrastructural activities in the country. Cranes are used in various processes and discrete industries like power, oil and gas, civil engineering, construction, and petrochemical industries to lift and transport heavy materials that are beyond manual labour capability. Furthermore, the Government of India is spending a considerable amount of money on the development of the nation’s infrastructure like roads, airports, railways, commercial spaces, and housing establishments, which is positively impacting the market growth.

Manish Mathur, CEO – Cranes, Action Construction Equipment, said “The overall outlook for next couple of years for pick and carry, and medium and heavy duty mobile cranes is positive. While we expect a sustainable growth on YoY basis, but due to pandemic, we might see some hiccups in between. But clearly, mobile cranes market in India will grow in the next three to four years.”

Satin Sachdeva, Founder & Secretary General, Construction Equipment Rental Association (CERA), feels that the scenario in India is encouraging due to two reasons – first, the paradigm shift towards buying new cranes from importing used cranes; second, the increase in use of heavy duty mobile crane in construction, cement, steel, wind and power sectors. “In India, it is the all-terrain cranes, crawler cranes, rough terrain cranes that dominate the market due to their versatility and operation efficiency.”

Added Chechi, “The medium-duty mobile cranes market revenue is anticipated to witness steady growth over the forecast period owing to their load lifting capacity and performance in both small and medium-range operations.”

According to Subhajit Chandra, Divisional Head – Mobile Crane Division, Liebherr India, “All terrain dominates the market owing to growth in the construction sector across India due to his versatility and operation efficiency. Use of heavy-duty mobile crane in Indian industries is the sign of increase in investments in construction, cement, steel, wind and power sectors are factors for the market growth. Liebherr make 450T to 1200T capacity all terrain cranes used in wind mills applications, infrastructure sectors, construction of elevated corridors, lifting the chillers and much critical applications in the industry.”

In 2020, COVID-19 had a negative effect on the crane and hoist market, resulting in decreased shipments of cranes and hoists and the revenues generated from them. As a result, a drop was witnessed in the growth trend of the market during the first half of 2020. This trend is expected to discontinue in the latter half of the year as the demand is expected to increase due to the growing demand from construction and shipping and material handling industry.

Said Mathur, “Infrastructure is the very foundation of every strong nation and economy. According to the vision of our Prime Minister Narendra Modi, India is coursed to growing into a $5 trillion dollar economy by 2024. This can definitely pave the way for the success of the construction equipment industry. Government spending on infrastructure and rapid urban development is at an all-time high. Also, the overall growth of the Indian economy, in the coming years, will further boost disposable income. This will in turn further increase the demand for better infrastructure and development.”

Sachdeva thinks that though the construction industry has been hit badly by Covid, and consequently the demand for mobile cranes has also been hit. But the silver lining is focus of government on infrastructure and therefore, the market for mobile cranes will witness growth in future. Once the current monsoon season passes, there will be surge in demand.

He adds, “The market for all terrain cranes and crawler cranes is predicted to accelerate owing to the expansion of cement plants, construction industry, infrastructure projects and the increased business potential of ship building and repair industry. Cranes will be required for the metro project for general erection as well as for heavy lifts involving lifting and lowering of TBM sections through the shafts. Greenfield nuclear power projects are also expected to be a major driver for medium capacity mobile and crawler cranes in the medium term.”

“The Covid-19 pandemic has substantially crushed the value chain of the mobile cranes market. India that accounts for a significant share of mobile crane manufacturing market, along with the other countries in the world has been adversely affected by the pandemic. The automotive, railway, aerospace, and defense industries are witnessing a decline in demand, which is expected to continue for the short term due to the global as well as the nationwide slowdown,” said Chechi.

He adds, “In India, the demand for mobile cranes is growing rapidly owing to the increasing number of infrastructure projects that have led to the requirements for assembly and lifting. The development is apparent in the industrial as well as the core infrastructure sectors. Mobile crane manufacturers and rental agencies are witnessing an upsurge in demand for medium and high-capacity cranes. Mobile cranes are widely used in India for major industrial applications such as power plants and turbine manufacturing.”

Says Chandra of Liebherr, “The last quarter of 2019 and the entire year 2020 were dominated by Covid-19. India, rather the world was ill prepared for the impact and scale of this pandemic, which has led to lockdowns and a still to be determined impact to country growth.”

He adds, “The government of India is also constructing one of the largest Greenfield airport projects in the world named Navi Mumbai International Airport (NMIA). The first phase of the airport will be able to handle more than 20 million passengers annually and the airport will be expanded to handle more than 90 million passengers annually. Thus, the ongoing projects and the growing investment from the foreign players and government side are driving the crane market in the country. Therefore, the market studied is anticipated to grow over the forecast period.”