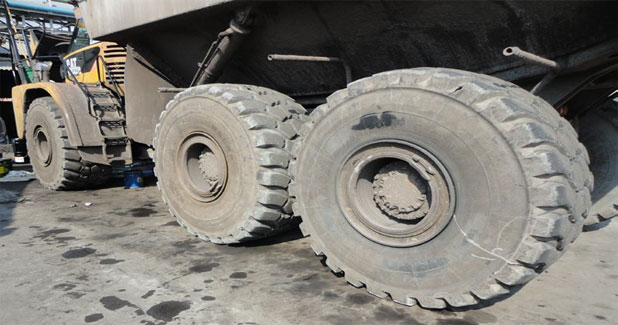 Current market trends
OTR Tyre market in India was not good in the past couple of years. But going forward, the prospects of OTR tyres are expected to be better with the various industry segments on growth path. The reason is obviously the progressive measures of the government in policy and execution level. The Budget 2017 has given increased thrust on infrastructure development with construction of more roads and highways, airports, ports and urban infrastructure. Construction and mining play a major role in these activities and this will directly influence the growth prospects of construction, mining and material handling equipment.

In the construction of roads and bridges, most of the construction equipment in use are tyre-mounted equipment, be it backhoe loaders, mobile cranes, wheel loaders or trucks, in which different types of tyres are being used. With the construction activities go up in future, there will be an increase in demand for on and off-highway tyres from OEMs and aftermarket. Mining though not gathered momentum, is slowly catching up with the mining activities are opening up to private sector, which will improve the use of more and more heavy mining equipment and dump trucks that can drive the demand for large size mining tyres.

CE growth
The CE industry continues to be dominated by backhoe loader segment while other equipment such as graders and compactors have grown, while some growth is now visible in the skid steer loader segment as well.

There is increased mechanisation happening in infrastructure and construction activities, as new equipment are being introduced. Earlier, there were just a few large multinational players in equipment market. Now we have domestic players who are standing up and introducing new products. More demand is expected from compactors, graders, skid steer loaders and such equipment apart from backhoe loaders. So this increased mechanisation is good for the tyre industry as well as the equipment industry.

In mining, large earthmoving equipment segment is now moving very fast. The machine sizes have grown bigger - from a regular 60 tonner, most of them have moved to 100 tonner, and even radial is coming in this segment.

Demand drivers
In construction equipment, backhoe loaders are the major demand drivers for tyres. In mining, dump trucks offer major opportunity for OTRs where there is good demand coming in. Ports is one of the key segments especially as per Indian market perspective. At the recently concluded Excon 2017, leading OTR tyre manufacturers showcased a range of new tyres catering to construction and mining equipment segments. Also introduced was new range of tyres focusing on underground mining, which has picked up largely outside India and is slowing coming up in India.

Technology changes
Improvements are constantly being sought with regard to tyre attributes. Changing requirements and demands from the user industry has put in more research and development efforts on OTR tyre manufacturers towards technologically advanced features to the tyres. The various features that sought improvement from time to time include: durability (including heat resistance), load, puncture and cut resistance, soil compaction and even reduced rolling resistance. Pneumatic tyres come in radial and bias (or cross-ply) types. In certain situations, the choices may be of solid tyres or foam-filled tyres instead of pneumatic ones for puncture-proof functions that add to the safe operation and uptime of the equipment. Adoption of tyre pressure monitoring system (TPMS) and other advanced tyre monitoring and management technologies are also emerging in the new technology trends in OTRs.

Challenges
One of the major challenges in OTR tyres seems to be the anomalies in GST rate for tyres. The government has reduced the GST rate for construction equipment from 28 to 18 per cent, but the tyres still fall under 28 per cent, as the largest share of tyres fall under the passenger vehicle category. Major OTR tyre players are of the view that all the tyres that go into OTR applications should be included in the 18 per cent slab of GST. Thus, the customer can find it value for money and will have to
shell out less.

Growth opportunities
Though tyre market growth is largely driven by passenger vehicles, OTR tyre segment is growing at a higher rate compared to automotive tyres. Government's various measures in infrastructure development have pushed the growth of construction and mining equipment, increasing the demand for OTR tyres. Also, the large amount of mechanisation happening in agriculture market has pushed the growth of agri equipment, leading the demand for agri equipment tyres. Tyre manufacturers are hoping that new programmes such as Sagar Mala and Bharat Mala to improve the construction activities in roads and port development projects which will provide opportunity for more tyres.

The tyre market is expected to grow with around 4-6 per cent in 2017-18, according to industry reports. In the following years, the market for OTR tyres looks positive with an expected increase in the overall infrastructure and construction projects in future. According to a TechSci Research report, during 2016-21, anticipated growth in the construction sector, small medium enterprises (SMEs) and mining sector is expected to boost demand for commercial and OTR vehicles, which would consequently augment commercial tyre sales in India. OTR tyre market in the Asia-Pacific (APAC) region is anticipated to grow at a CAGR of 9.32 per cent during 2016-2021. APAC region contributes to the major growth share to the global OTR market.

Looking ahead
On the future of OTR tyre market in India, the outlook seems to be positive as the different user segments are growing and project a good growth in the coming years. Be it construction equipment, large mining machinery or agri machinery, with the overall infrastructure construction, mining and agriculture markets looking positive, the OTR tyres are here to grow.


Major OTR tyre players are of the view that all the tyres that go into OTR applications should be included in the
18 per cent slab of GST.