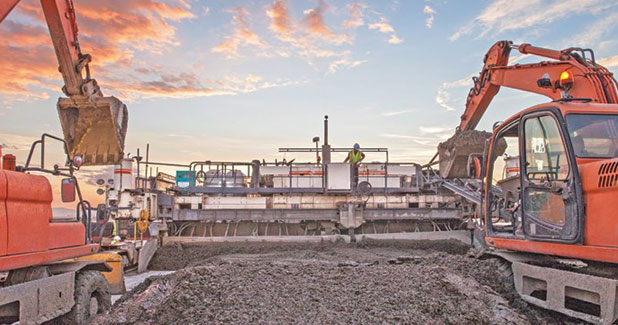 July 08,2016
The high-performance SP 1600 and the flexible SP 500 from Wirtgen were chosen to guarantee a high-quality concrete paving result and to meet the tight deadline of constructing the New Ulaanbataar International Airport (NUBIA).
Ulaanbaatar is the hub for the rising economy and centre of expansion for trade and industry. Mongolia is also the world?s second largest landlocked country and depends on aircraft traffic bringing in and taking out passengers and cargo. The existing Chinggis Khaan International Airport is in need of an upgrade and expansion of the airport capacity is absolutely essential. The airport was built in 1956 and upgraded in 1987 and 1997 for international traffic.

According to Project Director Enkhbat Navaantseden, ?The current airport faces safety, usability and operation difficulties such as unidirectional landing due to the 2.5 per cent slope of the runway and high mountains to the south; flight delays caused by the limited range of visibility and domestic heating smoke pollution in winter time; and deficiencies in the passenger terminal building configuration and capacity,? (source: project website www.nubia.mn).

For this reason, the new airport is located in the Khushigiin Khundii valley of the province of Tuv, only 52 km away from Ulaanbaatar. NUBIA is built on an easily accessible elevated plain with no mountains in the immediate take-off and landing air corridor.

High-grade concrete runway for extreme climate and larger aircraft
The airport is designed with a robust 3,600 m-long category 4E, which is to be constructed from concrete. This means that the runway will be better equipped to withstand the harsh weather conditions of the extreme continental climate. Furthermore, the runway will be able to handle large aircraft like a B747 or A340 in the future.

The new location, the advanced design and installations like a 24-hour all-weather air traffic control system will help to improve the safety and the possibilities of the airport facility. NUBIA has been designed to take three million passengers a year, three times more than currently, and the airport will be able to handle ten times more cargo than now.

To finance the airport project, the Government of Mongolia has signed a 40-year soft loan agreement for JPY 65.6 billion with the Japan Bank for International Cooperation. The Mitsubishi-Chiyoda Joint Venture (MCJV) won the contract in the technical bidding. In May 2013, the main construction contract was signed between MCJV and the Civil Aviation Authority of Mongolia. The concrete paving works started in May 2014. The entire construction work was awarded to the prime subcontractor Samsung C&T and the concrete paving work is being carried out by the long-standing Wirtgen customer Sungdo Construction from South Korea. The Korean company is specialised in slipform paving jobsites.

Dongin Park, Samsung C&T Project Manager of the NUBIA project, summarises the construction challenges, ?We have to face the extreme continental climate with short, hot summers and long, icy winters. This gives us a construction time window of only three to four months during summer time. The wind from the Gobi desert and the intensive sunlight quickly dry out the concrete. That?s why the main paving operation with the SP 1600 had to happen during night shifts.?

High-performance paving operation with utmost precision
The SP 1600 is the flagship among the large Wirtgen slipform pavers. It paves high-quality concrete slabs at widths of up to 16 m. A second complete concrete paving kit is available for integration into the SP 1600 to enable the highly economical paving of dual-course concrete slabs in a single operation. For the new airport, the SP 1600 is paving the 45 m-wide and 3,600 m-long runway in several segments with a paving width of 11.25 m and a paving thickness of 38 cm on average.

The first layer paved by the SP 1600 is a 27 cm-thick cement concrete slab followed by a second layer consisting of an 11 cm-thick cement concrete slab paved wet-in-wet immediately after the first layer to achieve a perfect bond between top layer and bottom course. Wire bar fabric was placed between the two layers for additional reinforcement according to the specifications of the Japanese company ?Azusa Sekkei and Oriental Consultants Joint Venture? which developed the airport design. Optimal material compaction is ensured by up to 48 electric vibrators emitting high-frequency vibrations. The right functional properties of the concrete surface are achieved by the oscillating beam and the super smoother of the SP 1600. ?With the SP 1600, we save a lot of time and money: instead of using four SP 500 pavers, we decided to go just for one SP 1600, as we have had good experiences with this high-performance paving train in the past. Dual-layer paving with one machine speeds up our operation. We are paving concrete with a material cost of around $20 million and using around 135,000 cu m of concrete for the runway, taxiways and aprons,? states Commercial Manager Seunghwan Lee.

The SP 500 takes care of the slightly curved aprons and some taxiway sections. Here up to five adjoining, parallel slabs are paved by the easily maneuverable machine. The paving width of the SP 500 is 5.625 m. In total, there are around 50,000 sq m of taxiways and 7,500 sq m of aprons to be paved by the SP 500.

Customer service support contributes to high machine availability
Sungdo Construction brought several containers of spare and wear parts to the remote jobsite. The regional service network of the Wirtgen Group supports the operation from several angles. If there is a need for additional spare parts, the parts can be easily flown in via a direct daily flight from Ulaanbaatar to the South Korean airport of Incheon. The local Wirtgen dealer Sambo Heavy Industries in South Korea supplies spare parts or the parts can be ordered directly from the Wirtgen headquarters in Germany. Since Ulaanbaatar Airport has a twice-weekly connection with Berlin-Tegel Airport in Germany, timely availability of parts is also guaranteed in an emergency. Service engineers from Wirtgen China and the Wirtgen headquarters in Germany can be on site within 24 hours.