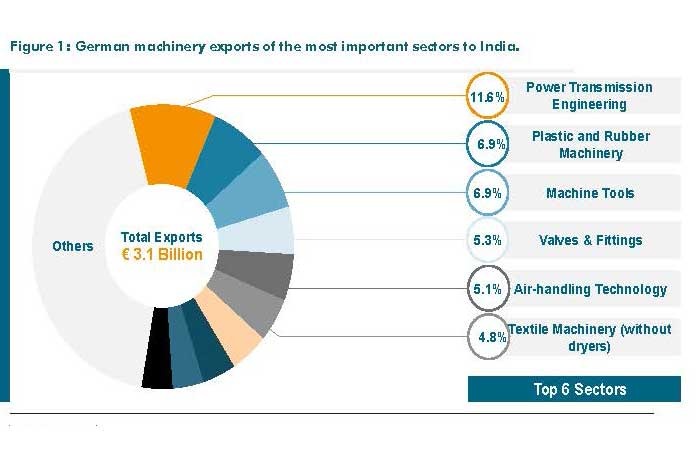 July 07,2020
VDMA India conducted the VDMA Business Climate Survey to analyse the impact of COVID-19 on the German Mechanical Engineering industry in India.
Germany is the seventh largest foreign direct investor in India. German FDI into India during 2018-19 was to the tune of $886 million. Germany’s cumulative FDI in India from April 2000 to June 2019 amounted to $11.9 billion. India is the sixth largest recipient of FDI from Germany. Top sectors attracting FDI inflows from Germany were automobile industry (37.22 per cent) services sector (29.34 per cent), trading (4.87 per cent), electrical equipment (4.10 per cent), drugs and pharmaceuticals (3.27 per cent). These top five sectors accounted for about 78.8 per cent of total inflows from Germany during the last fiscal.
Germany is India’s largest trading partner in Europe. The trade volume between India and Germany, during first half of 2019, showed an increase of 7.69 per cent. India ranks 15th globally, in the list of top 50 destinations for the German Mechanical Engineering exports. In 2019, the total import of machinery from Germany reached a volume of €3.07 billion. This was a drop by 8.6 per cent compared with the same period of time in the previous year.
Among the machinery sectors, major demand of German equipment was for Power Transmission (11.6 per cent), Plastics and Rubber Machinery (6.9 per cent), Machine Tools (6.9 per cent), Valves & Fittings (5.3 per cent) and Air Handling Technology (5.1 per cent). There are other sectors like Construction Equipment & Building Material Machinery, Fluid Power Equipment, Textile Machinery and Food Processing & Packaging, which are growing steadily in India.
Out of the total export of German Mechanical Engineering to Asia of €41 billion, India is the second largest sales market in Asia for the German engineering industry, with a share of 7.5 per cent, after China (45.8 per cent). In 2019, India imported machinery of the value €24 billion globally. Germany is the second most important supplier to India globally, share of around 15 per cent.
In 2019, India exported machinery worth of €756.2 million to Germany, and showcased a growth of 3.2 per cent over the previous year. The top sectors which experienced the highest demand were Power Transmission, Precision Tools, Valves & Fittings, Compressors and Pumps.
VDMA India conducts the VDMA Business Climate Survey twice every year, in spring and again in autumn. This survey is an integral part of the association’s activities here in India. And this joint initiative between the association and its members is considered as an additional compass playing a major role in future decision making.
COVID-19 has had a major impact on businesses this year and despite the prevailing uncertainty, our members were able to share their forecast for the next six months. As many as 205 participants from more than 160 organisations across different sectors of the mechanical engineering industry shared their evaluations regarding their company’s business and the situation of their most important customer industries.
Mechanical engineering companies in India are much more pessimistic than they were six months ago. This is shown by the results of the current VDMA business climate survey.  2019 was not necessarily the best year for the mechanical engineering sector in India. Many companies were hoping for a better year in 2020, but the corona pandemic shattered all
such hopes.
Development of current business situation
The diffusion index (Figure 2) of the current business situation stands currently at -79 percentage points. The index is calculated by subtracting the share of companies reporting a good business situation minus the share of companies reporting a bad business situation.
About 80 per cent of the respondents assess their current business situation as bad while only one per cent felt that their current business situation is good. In autumn 2019, the share was significantly lower (29 per cent). Moreover, the current survey results are the weakest since the start of the survey in 2017. The same applies to the development of the capacity utilisation where 75 per cent of the companies report a below normal level. The current level of capacity utilisation of their company was seen as ‘normal’ by 54 per cent, whereas 10 per cent are operating at high and 36 per cent at low rates of utilisation.
The economic outlook is concerning where 45 per cent of the respondents expect their situation to worsen during the next six months while 25 per cent expect an improving situation. The world has been put in a great lockdown and the magnitude and speed of collapse in activity that has followed is unlike anything experienced in our lifetimes. The road to recovery will be slow given the many adverse factors that continue to exert downward pressure on the economy (e.g. lack of orders, labour and raw material shortages, travel restrictions and logistical issues). Companies are forecasting average revenue to decline by 2 per cent compared to 2019.
The restrictions on trade and business due to corona pandemic are the major reason of the slowdown. This could continue to weigh on the Indian economic prospects and business activities of the real economy unless well strategised government intervention takes place. Industries are hoping for stimulus and other measures announced by the government to play their role in boosting the economy. What also ails the economy is lack of demand. And the one factor to revive the economy instantly would be ‘consumption’. Thus it is extremely critical to stimulate demand and drive consumption.