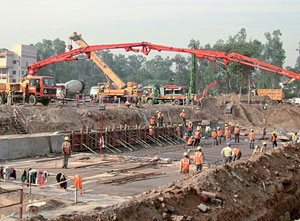 Looking at a Big Boom

April 07,2014
Only about ten per cent of concrete produced is currently pumped, which tells about the huge scope for concrete pumps for the infrastructure and realty sectors. Agith G Antony trains his spotlight on the latest trends in product/technology, the growth potential for boom pumps, innovative service packages and the value additions offered by OEMs.

The prevailing demand-supply mismatch has a slew of reasons behind it: overcapacity and the prevailing slowdown in the economy over the last two years. Despite this, however, the long-term demand curve for concrete pumps, especially boom pumps and boom placers, is expected to get back on track. The very fact that we have not yet touched double digits when it comes to concrete pumping, when compared to over 50 per cent of the developed markets, tells its own story. A country like Turkey with 65 million people, sells 350 boom pumps every year whereas the units sold in India is not even a hundred. Looking at the future, urbanisation brings a steady flow of people into the already stressed fabrics of the cities, so even a city like Mumbai will need over a hundred boom pumps per year. The mega cities with mass housing projects which need mass concreting in less time will be major growth drivers. But there are many hurdles to overcome, be it acquiring a steady flow of projects in various verticals to drive demand or increasing the speed of construction, which is pretty slow compared to developed markets, as well as clearing the financial bottlenecks.

Hoping against hope
According to Parminder Gabri, Sales Director, Putzmeister Concrete Machines, the growth of pumps has been flat for last two years but there is huge scope for the coming times. Parminder says ?In India, less than ten per cent of the total concrete manufactured is pumped using concrete pumps. This is far less than the figure worldwide, where more than half of the concrete manufactured is pumped. Boom pumps are becoming more popular among construction companies. We expect a huge surge in demand once the market picks up. Other positives will be government policies for the manufacturing of ready-mix concrete, growth in the real estate sector and the introduction of new infrastructure projects by the government.?

Rajesh Kawoor, Vice-president (Concrete Business), Universal Construction Machinery & Equipment, is on the same page. ?The current market requirement has been negative since the last couple of years, and the demand for concrete boom pumps is on the lower side compared to the built-up capacities of the OEMs,? he says.

Why boom pumps?
The boom pump is a good investment for large projects like the Metros, monorails, airports and other high-rise infrastructural and residential buildings. These massive pumps shorten the time duration of project completion, reduce downtime and labour costs. Contractors are realising that making a smart investment like this reduces their dependency on manpower and meets their project deadline with ease.

VG Sakthikumar, Wholetime Director Operations, Schwing Stetter India says, ?The boom pumps are a different breed of concrete pumps; unlike other stationary and line pumps where the pipelines need to be laid well before pumping; the boom pump does not require this exercise. It has an assembly of pipelines with R, Z or R-Z folds which enable a 360o rotating capacity.? According to him, the most economical construction machine is the one that can be used continuously. Therefore, it should be rugged, reliable and above all, suitable for universal applications, from increased concrete placement speed to having a tower crane free to handle other necessary lifting and reduced labour requirements.

According to Samar Ghoshdastidar, Technical Director, Simplex Infrastructures, boom placers and boom pumps are used for faster concreting. He says, ?Once you bring a certain amount of concrete from a batching plant, you must place this concrete as fast as possible, before the initial setting process starts. With boom placers, we can do the concreting much faster, even for small columns. If we are not using boom placers, we have to fix concrete pipelines in each and every place or bring the concrete near the place and put it inside manually. This takes a lot of time. Thus, boom placers are more handy compared to pumps, even though they have their own limitations. The use of boom placers is gradually picking up and becoming popular. Today, most projects have three to four boom pumps and one placer. People are finding the use of boom placers much easier and it is slowly gaining popularity.?

Tech trends
As the requirement of boom pumps are increasing, all the OEMs are focussing more on offering the latest technology, to make the machine more user-friendly, minimum maintenance, and lowest operation costs, because that gives them an edge over competition. Considering the fact that many projects coming up require huge quantities of concrete to be pumped and most of these projects are time-bound, the demand for higher output concrete pumps will be quite good. The most important factor for concrete boom pumps is the reliability and most OEMs are giving special focus on making concrete pumps more reliable than the earlier versions.

Folding systems: According to Gabri, the folding system of the boom has witnessed an improvement over three generations. It started with the Roll Fold, followed by the RZ fold and at present with the Z fold, a typical 4-arm boom folding. ?Putzmeister?s 4-arm boom pumps are equipped with the latest Z fold in order to give better reach at complicated construction sites,? he says. There are several advantages to having a Z type fold boom. The Z fold boom is easy to manoeuvre, having increased flexibility and a faster horizontal movement. It requires less unfolding heights and is highly suitable for working in areas where space is a constraint.

?The OEMs here in India have already come out with a range of concrete pumps with the latest technology and advanced features built into them, and that helps a user bring down operating costs,? states Kawoor. For example, the changeover from low pressure to high pressure and vice versa is very easy in Universal Zoomlion concrete pumps, as the operator doesn?t not require to change the hydraulic hoses and this r process can be completed within five to ten minutes; moreover, the operators do not need to suspend the pumping operation for changeover.

Green Pumps: Concepts such as low lifecycle cost, faster return of investments, cost per cubic meter, all have a positive impact on OEMs, who have launched a variety of pumps to suit the requirements of the customer, coupled with innovative service packages. Fuel efficiency is one major parameter that a customer looks into, given the bearing it has on the design of green products. Putzmeister?s new range of eSmart concrete pumps, launched during Excon, has already created a niche for itself. It has an electronic control (OPS) which allows much better control and monitoring. As claimed by the company, the pump is a green and smart machine; green because it only uses 70 litres of hydraulic oil instead of the over 300 litre used by the competition; smart because it gives all the information about pumping hours, running hours, and wear and tear. Gabri states, ?High wear and tear is always a challenge in construction sites as the concrete wear pattern changes according to different sites. The abrasive nature of the stone aggregates, its shape and limitations in availability of river sand, contributes a lot to the wear and tear of a pump. To address this, Putzmeister introduced chrome-plated delivery cylinders and carbide parts in India. These carbide components are highly resistant to the natural wear caused by the movement of concrete inside the pump.?

Huge opportunities
With the huge infrastructure development opportunity in India looming in the coming fiscal year, the popularity of boom pumps is set to increase manifold among builders and contractors. The major customer sectors to drive the boom pump market are the mega cities with mass housing projects which need mass concreting in less time. Gabri has the last word. ?India needs more irrigation and hydro power plants to meet the increasing demand. This sector requires a lot of concreting in dams, tunnels and powerhouses, where concrete equipments like pumps, telebelts, boom pumps, shotcrete machines are in demand.?

Pipelines used: For high pressure zone (mainly the horizontal pipe and about 100 m of height); Special quality pipes with wall thickness of 12 mms and capable of withstanding pressure of more than 40 Mpa will be used for pumping at higher heights. Pumping procedure: A trial run was carried out at site by Sany/Putzmeister to check the pressure requirement for pumping concrete at higher levels, for checking the suitability of the pumps, for pumping the concrete for this high-rise building.

Two pumps and two pipelines are in use for the pumping of the concrete. One additional vertical pipe line has been kept as a standby pipe for use in case of any concrete blockage in the line.

Concrete supplied by the RMC supplier is put directly on the pump hoppers, after checking the quality of each load, by the QC department. Slurry is pumped before starting the pumping operation, for priming of the pipe lines.

Hydraulic pressure of the pumping system is closely monitored, for the pumps, during the operation. For pumping at a height of 200 m with the horizontal pipelines of 85 m, pressure has been observed to be 20 MPa.

To reduce wastage of the concrete top-down, a cleaning system is used and this way, concrete wastage is limited to only 0.1 per cent. The cleaning is started from the top end of the pipe, concrete from the pipeline is taken back to the transit mixer and it is re-used.
Source: Simplex Infrastructures

Concreting for irrigation projects
The aggregate size of concrete used for irrigation projects is quite bigger and generally not pumpable. Therefore, for such projects, customers prefer telescopic belt conveyor mounted on the truck (a telebelt) which can convey concrete up to a distance of 40 m with bigger aggregates and low or zero slump concrete. The telebelt is a mechanised and faster way of concreting canal linings. India needs more irrigation and hydro power plants to meet the increasing demand. This sector requires a lot of concreting in dams, tunnels and powerhouses, where concrete equipments like pumps, telebelts, boom pumps, shotcrete machines are in demand.